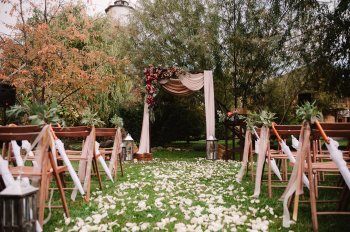 The National Secular Society has welcomed proposals to grant couples more freedom over where they choose to marry as part of a comprehensive reform of England and Wales's wedding laws.

The Law Commission has proposed introducing an officiant-based system for the legal recognition of marriage, to replace the current restrictive building-based system, in line with NSS recommendations.

This would mean all weddings were legally permitted to take place in a location chosen by the couple. Couples will be able to marry outdoors or in their own homes.

The proposals would enact several measures which the NSS has lobbied for:

They would also allow weddings conducted by non-religious belief organisations, such as Humanists, or independent celebrants to be recognised, if the government decided to permit them.

The Law Commission will now consult on its proposals before making recommendations to the government.

The commission says the current law is a "complex maze of different rules for different types of ceremonies, based around the use of particular types of building".

"But in the past two centuries, England and Wales have experienced profound social changes. As a society, we are far more culturally and religiously diverse, we are far more secular and people want to celebrate their weddings in varied and unique ways."

It adds that the "essential" requirement to protect the state's interests and "ensure legal certainty" is that "each party to the marriage expresses their consent to marry the other".

NSS head of policy and research Megan Manson said the proposals would represent "a welcome and significant overhaul of the law governing weddings".

"If enacted these reforms would create a more secular and less restrictive system of marriage, giving couples the flexibility and freedom to marry in a way that is meaningful to them.

"There are also welcome signs that they would help to protect the individual rights of those marrying in a variety of religion and belief traditions.

"We look forward to responding to the consultation."