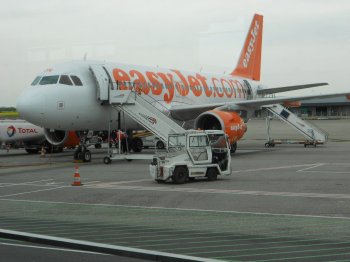 The National Secular Society has called on easyJet to protect passengers from discrimination after a woman said she was asked to move seats to accommodate the wishes of ultra-orthodox Jewish men.

The NSS has written to the airline to urge it to implement policies to protect all passengers from sex-based discrimination after British-Israeli citizen Melanie Wolfson raised a compensation claim against it.

The society said such policies could include removing passengers who refuse to sit next to other passengers because of their sex, in line with a similar policy implemented by El Al Israel Airlines in 2018.

The details of Wolfson's case are outlined in the lawsuit filed on her behalf.

It says she was asked to move seats on two separate flights when ultra-Orthodox Jewish men refused to sit to her because of her sex.

In the first incident she paid extra for an aisle seat on a flight from Tel Aviv to London last October. An ultra-Orthodox Jewish man and his son, who were sitting in the row when she arrived, asked Wolfson to switch seats with a man a few rows ahead.

A flight attendant intervened and asked Wolfson to comply with the man's wishes. She was concerned that the flight might be delayed and agreed to switch seats.

The lawsuit also says she was again asked to move seats by two ultra-Orthodox men on another easyJet flight to London two months later.

She refused their request but two female passengers agreed to change seats with the two men sitting next to her. Members of the cabin crew did not intervene or try to defend the rights of the female passengers to remain in their seats.

Wolfson is claiming the equivalent of nearly £15,000 for her experience, which she says left her feeling "insulted and humiliated".

In its letter to easyJet, the NSS said religious freedom "is a qualified right" and the religious beliefs of one passenger shouldn't "serve as a reason for an airline to treat another passenger unfairly".

It called on easyJet to adopt El Al's policy, which enables the removal of passengers who refuse to sit next to others because of their sex.

NSS head of policy and research Megan Manson said: "Female passengers should never be asked, however 'politely', to move their seats in order to accommodate the sexist beliefs of religious fundamentalists.

Image by Hugo Petitjean from Pixabay.