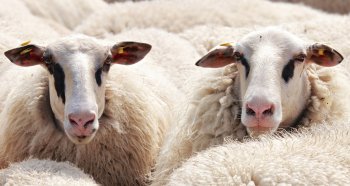 The National Secular Society has warned of an "unacceptable lack of transparency" after the Food Standards Agency stopped publishing data on the number of animals being slaughtered without pre-stunning.

In a letter to the environment secretary George Eustice, the NSS has highlighted the fact the FSA has stopped publishing the data in quarterly reports on animal welfare non-compliances.

In correspondence with the society, the FSA said data on animals slaughtered by stun, non-stun and combined methods was "no longer collected".

UK law requires that farm animals are stunned before slaughter, with an exemption for non-stun kosher or halal meat to meet Jewish and Muslim religious dietary preferences.

In the NSS's letter, its chief executive Stephen Evans said the lack of data "amounts to an unacceptable lack of transparency over a serious animal welfare issue".

He noted that the 2019 Conservative party manifesto pledged to raise standards in animal welfare, adding: "A failure to closely monitor and report non-stun slaughter figures will represent a huge step backwards that will undermine both animal welfare and public trust."

He said surveys had suggested a sharp rise in non-stun slaughter in the last decade, adding that it was "of serious concern if greater numbers of our animals are being subjected to unnecessary suffering".

He added that the non-stun slaughter industry was "already fraught with transparency issues" because there is no requirement to label meat which has not been pre-stunned.

Explaining the letter, Mr Evans said: "Non-stun slaughter causes avoidable pain and distress to animals. While non-stun slaughter is permitted, no more animals than necessary to meet religious demand should be slaughtered without prior stunning.

"The government should seek to reduce and ultimately end non-stun slaughter. And in the meantime it should ensure this data remains available as a point of democratic principle, so the public can remain informed about the impact of deeply contentious policy."

The NSS's campaign on non-stun slaughter

Support for an end to non-stun