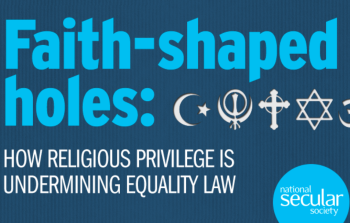 Equality law is failing to protect the non-religious and members of religious minorities from discrimination, a National Secular Society report has warned.

The report, which marks the 10th anniversary of Equality Act, says religious exceptions within the act mean discrimination against the non-religious and members of religious minorities remains lawful across key areas of public life.

Faith-shaped holes: how religiously privilege undermines equality law calls for the closure of the legal loopholes that allow faith-based discrimination to continue.

The report says "glaring gaps" in equality legislation are "leading to undesirable and unnecessary religious discrimination, fuelling societal segregation, and reducing opportunities for people because of who they are or what they believe".

It says reform is needed in relation to education, caste-based discrimination, and employment. It adds that those "already struggling on the margins of society" are most likely to be negatively impacted by religious exemptions and omissions in the Act.

On education, it says "exceptions to accommodate faith schools, faith-based admissions and religious practice in schools" are leading to a level of religious discrimination that "would not be tolerated in any other area of society".

In one of many testimonies highlighted in the report, one parent writes: "My daughter has no school to go to in her borough due to draconian and discriminatory criteria used by faith schools."

It recommends that the government removes exceptions that enable state-funded schools to discriminate against individuals on the basis of religion or belief. This would include the removal of the requirement for all state schools to hold acts of collective worship.

It would also mean the end of discrimination in faith school admissions and recruitment, and the discrimination caused by curricula that favour particular religions.

The report notes that caste-based discrimination and harassment have "become a feature of British life".

It notes evidence suggesting "tens of thousands, perhaps even hundreds of thousands" of people are affected, and calls on ministers to add 'caste' as a protected characteristic under the act.

The report says an exception in the act which allows employers to discriminate on the basis of religion or belief when there is a 'genuine occupational requirement' is "being overused".

It recommends that the government strengthens protections against discrimination in recruitment for religious organisations.

In a foreword to the report, former equalities minister and Liberal Democrat peer Lynne Featherstone writes: "The Equality Act has contributed to the UK becoming a more tolerant nation and has been vital in tackling discrimination against minorities and safeguarding individuals' rights.

"This ten-year anniversary provides a timely opportunity to assess the impact of the act. As this excellent, informed, and forensic report by the National Secular Society demonstrates it is certainly not a case of 'job done'.

"The continued existence of exemptions for religious privilege is completely at odds with ambitions to create a fair society."

National Secular Society head of policy and research Megan Manson said: "The Equality Act was a landmark piece of legislation which has helped to make the UK fairer and more tolerant.

"But a decade after it came into force, it should be reviewed to ensure it guarantees protection for all. As the UK becomes increasingly irreligious and religiously pluralistic, our equality laws need to be robust in order to promote social cohesion and equal opportunities.

"That means closing loopholes which allow faith-based discrimination in our schools and workplaces."

The report is available to read, along with its key findings and recommendations, on the NSS website.