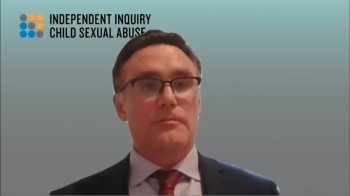 Witnesses at the Independent Inquiry on Child Sexual Abuse have called for the mandatory reporting of abuse allegations, as several religious groups' failings on safeguarding were exposed last week.

Failures within the Jehovah's Witnesses (JW), Jewish groups, Muslim groups and elsewhere were highlighted during hearings on child protection in religious organisations and settings.

In closing remarks lawyer Richard Scorer (pictured), who was representing several core participants, was among those to call for a law requiring the reporting of abuse allegations to the statutory authorities.

During his evidence, former JW elder Lloyd Evans said there was "no room for deviation" within the Jehovah's Witnesses, adding: "This is a group that feels they are answerable only to God."

A survivor of abuse within a JW community, Sarah Davies, said she was taught that everyone outside the faith was "controlled by Satan".

And before the hearings, survivors of child sexual abuse at the hands of JWs from across the country demanded an apology from the group's UK leaders in an open letter.

Scrutiny of Jewish and Muslim communities' response to abuse

Meanwhile Jim Gamble, a commissioner responsible for safeguarding in the City of London and Hackney, told the inquiry that engaging yeshivas – Jewish educational institutions – is "like playing whack-a-mole", as they often move when they're detected.

And Nazmin Akhtar, from the Muslim Women's Network UK, said victims of abuse within Muslim communities were often told not to report it.

Scorer, who is also a National Secular Society vice-president, said a mandatory reporting law would provide "a refuge for those within regulated activities who often face fierce pressures not to report".

He added that a broader "legal and structural overhaul" was required and that religious organisations "often fail to understand that dealing with child abuse is a special skill".

"It is not simply another aspect of the pastoral role of a rabbi, imam or a priest and it requires an overriding focus on the child, not on the reputation of the synagogue, the mosque or the wider community."

And Grenville suggested the absence of mandatory reporting made it harder to take action against religious charities which don't report allegations of abuse.

NSS president Keith Porteous Wood, who has contributed to work on clerical abuse at the UN for over a decade, said the hearings provided "eye-opening evidence of the need for a mandatory reporting law".

"There is hardly a religious organisation which doesn't have a problem with child abuse. This is because of opportunity, power and invulnerability to sanctions, and has in some cases been facilitated by industrial scale cover ups. Those who have the temerity to complain are often vilified by the hierarchy.

"Where religious groups restrict the ability to report or deal with abuse, the authorities must be prepared to take robust action. We urge IICSA to make recommendations which recognise this and to heed the calls being made for a mandatory reporting law, without providing an exception for religious institutions – for example for the confessional."

IICSA's latest hearings, which lasted for 16 days in total, have considered child protection in religious settings which had previously been beyond its remit.

The inquiry has previously held substantial inquiries into the handling of abuse by the Church of England and the Catholic Church.

Listen: The Church of England's archbishops' council has been reported to the Charity Commission over failures in safeguarding. The BBC's Sunday programme covers the story (from 31:17).