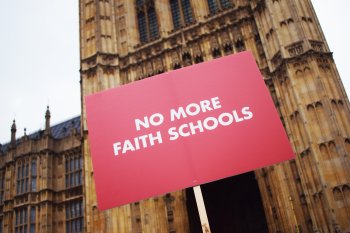 Proposals to open 19 new faith schools in England are not being properly scrutinised because of a lack of transparency around them, the National Secular Society has warned.

The NSS has written to the Department for Education after the DfE rejected the NSS's request to see details of proposals for the schools.

In its letter the NSS has requested an independent review of that decision and accused the department of attempting to "shield controversial decisions from scrutiny" and "exclude the public from debating them".

The 19 faith schools are among a group of new schools which were proposed in wave 14 of the government's free schools programme in February. They include 14 Christian, three Islamic and two Sikh faith schools.

The department rejected the NSS's request on the basis that the public interest in releasing the information did not outweigh the arguments against disclosure.

It said the process of assessing applications should be "free from speculation and lobbying until the final decision is made".

It also said some groups may "be discouraged from applying" to run schools or "feel under pressure to produce future applications that avoid prejudice from any interest and attention" if it released the details.

It cited exemptions outlined in section 36 of the Freedom of Information Act 2000 in support of its decision.

The NSS's letter said the DfE's approach failed to account for the public interest in seeing proposals during their assessment phase and would undermine opportunities for "open and informed public debate and feedback".

"Transparency over the application/proposals does not reduce the scope for full and frank exchange of views or impinge on the privacy of the final decision maker.

"Public scrutiny is not an ill to be avoided, but essential in a democratic society."

The society added that section 36 of the Freedom of Information Act was "not intended to shield decision making from criticism or debate".

In a blog on the NSS's No More Faith Schools website earlier this month, the society's head of education Alastair Lichten warned of a "damaging democratic deficit" around the applications.

He also noted that at least seven of the 19 schools had been proposed in areas where government data suggested there was minimal or no need for new school places.

Explaining the decision to send the letter, Mr Lichten said: "Divisive faith schools are being foisted on communities that may not want or need them as a result of the government's opaque process for assessing applications.

"The decision to reject this freedom of information request, which is based on spurious logic, will exacerbate these problems. It will prevent opportunities for feedback and input and undermine good policy making.