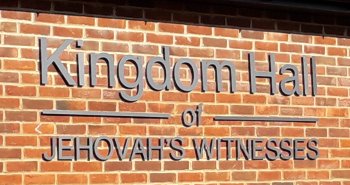 The National Secular Society has urged Britain's charity regulators to ensure the restructuring of Jehovah's Witnesses (JW) charities does not obstruct victims of child abuse from claiming compensation.

The NSS has raised the issue with the Charity Commission for England and Wales and the Scottish charity regulator, OSCR, after a report on BBC Radio 4's Sunday programme this week.

The programme reported that the church is selling off substantial amounts of property and land that it owns. As part of a significant restructuring of the organisation, each congregation is being asked to dissolve its charitable status and merge – along with its assets – with the Kingdom Hall Trust.

The trust is a registered charity whose aims include being a "custodian trustee holding title to freehold and leasehold properties acquired as places of worship".

The assets mentioned on the Sunday programme included kingdom halls, which are used for worship and meetings.

An abuse survivor and lawyers who spoke to the programme expressed concern that such a restructuring could leave JW charities unable to pay potential liabilities.

A number of JW churches worldwide have been subject to investigations regarding their handling of sexual abuse allegations in recent years. In Australia, JW organisations have consolidated and sold properties worth millions of pounds amid a series of legal claims and a damning report from a royal commission.

NSS chief executive Stephen Evans said: "It is clearly not in the public interest for charities to be permitted to restructure in ways that may impede victims and survivors of abuse within these communities from claiming compensation.

"We therefore urge the Charity Commission to use all available powers to ensure that the restructuring of JW charities does not impede abuse victims' and survivors' ability to obtain settlements."

Jehovah's Witnesses and abuse in Britain

JW communities' handling of abuse allegations will come under increased scrutiny next month, when the Independent Inquiry on Child Sexual Abuse is due to conduct hearings on the issue.

In 2018 scores of alleged victims accused the JWs of a culture of cover-up of child sexual abuse. Earlier this year at least 20 former JWs launched legal action over abuse which they say they suffered.

In 2017 the Charity Commission severely criticised the New Moston Congregation of Jehovah's Witnesses in Manchester over its handling of allegations of abuse.

And in 2016 the Supreme Court ruled that the Watch Tower and Bible Tract Society of Great Britain, which oversees JW congregations, couldn't prevent the commission from conducting an inquiry over its handling of abuse allegations.

This week's episode of the Sunday programme is available on the BBC website; listen from 5:20 to 21:45 for the relevant section.