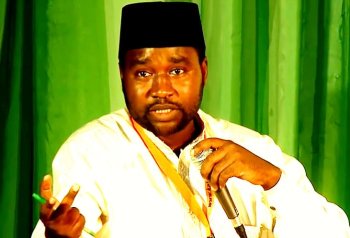 The UK government has said it is looking in to the case of Humanist leader Mubarak Bala, who was arrested for blasphemy in Nigeria in April, "on an urgent basis".

Bala, the president of the Humanist Association of Nigeria, was arrested after apparently criticising Islam on Facebook.

He has not yet been charged or released and colleagues have expressed concerns for his safety. According to recent updates, his whereabouts remain unknown and he has not been granted access to his legal team.

Nigeria's constitution theoretically guarantees freedom of expression but also allows states to set up sharia courts – which can punish blasphemy by death.

In response to a question in parliament this week, the minister for Africa James Duddridge said he had raised the case with Nigeria's minister of foreign affairs last month.

He said the prime minister's special envoy for freedom of religion or belief, Rehman Chishti, was "personally looking into Mr Bala's case on an urgent basis".

He said Chishti had raised the case internationally and the UK's high commission was discussing the case with the Nigerian authorities.

He added: "We will continue to stress the importance of a transparent investigation that respects Mr Bala's human rights, the rule of law, and the Nigerian constitutional right to freedom of religion or belief.

"Defending freedom of religion or belief for all remains a UK policy priority and we will continue to use our voice internationally to protect this human right."

As part of its reponse to the arrest the National Secular Society has written to ministers and the Nigerian ambassador to the UK to lobby for Bala's release.

The NSS has also encouraged supporters to raise the case with their MPs, some of whom have now highlighted the government's position in response.

An international effort to free Mubarak Bala is being coordinated by the NGO Humanists International, and groups including Humanists UK are also lobbying for his release.

NSS head of communications Chris Sloggett welcomed the government's response and thanked the society's supporters who had helped to raise the case.

"Mubarak Bala is in danger simply for speaking his mind. His safety must be guaranteed and his fundamental right to freedom of religion or belief protected.

"Ministers are right to stand up for him, and they should continue applying pressure on the Nigerian authorities to secure a swift and satisfactory resolution to this case."

Meanwhile this week, a Christian couple who have been in prison for six years and sentenced to death for blasphemy in Pakistan saw an appeal against their conviction delayed.

Lahore's High Court was due to hear Shagufta Kausar and her husband Shafqat Emmanuel's appeal on Wednesday, but the hearing was delayed with a new date yet to be announced.

Saif ul-Malook, the lawyer who was named as the NSS's Secularist of the Year for 2019 after his work defending the blasphemy accused Asia Bibi, is representing the couple.

According to Humanists International, Mubarak Bala's whereabouts and wellbeing remain unknown six weeks on from his arrest.

Bala has still not appeared before a court in person, nor has he been granted access to his legal counsel.

On 17 June, a fundamental rights petition filed by Bala's legal counsel is due to be heard before the Abuja High Court.