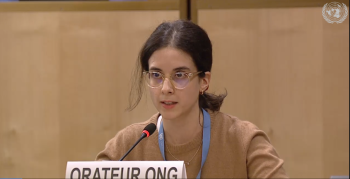 The National Secular Society has urged the UN Human Rights Council to push the UK government to legislate to outlaw discrimination on the grounds of 'caste'.

In an oral statement to the council, NSS vice-president Josephine Macintosh highlighted the government's failure to legislate on the issue and described its approach as "grossly inadequate".

Ministers have refused to amend the 2010 Equality Act to outlaw discrimination on the grounds of caste, preferring instead to rely on the potential evolution of case law.

Josephine Macintosh said this approach "amounts to a covert refusal" to implement a UN recommendation in 2012, which said the UK should legislate in line with its human rights obligations.

She said the government is risking the setting of a precedent that reduces protection against discrimination, and that those most in need of protection are unlikely to have funds to mount a legal challenge.

And she said the result had "distinctly detrimental effects" on victims, ranging from depression and social isolation to loss of employment and reduced access to old people's day centres.

She told the UNHRC that the NSS "deeply regret(s) that the UK government has shown so little concern to protect the victimised".

And she called on the council, the UN's committee on the elimination of racial discrimination and state parties to "strongly encourage" the UK to comply with its treaty obligations by legislating.

The NSS's intervention came during a debate on human rights situations that require the council's attention at its 43rd regular session in Geneva.

The NSS also submitted a written statement on the subject.

The impact of caste discrimination