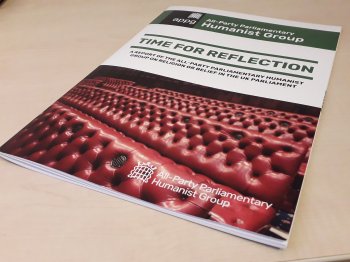 The automatic right granted to 26 Church of England bishops to sit in the House of Lords should be repealed, according to a report from a parliamentary group published today.

The report, from the all-party parliamentary Humanist group on religion or belief in the UK parliament (APPHG), says there should be "a time for reflection" on the UK's constitutional settlement.

Its recommendations, several of which align closely with National Secular Society campaign goals, include:

The recommendation to remove religious representatives from the Lords echoes the key measure proposed in the House of Lords (Removal of Bishops) Bill, which was introduced to parliament last month.

The bill was proposed by Dick Taverne, a Liberal Democrat peer and NSS honorary associate, and drafted with NSS support.

The report also finds that senior Anglican clerics used their guaranteed seats in the Lords to change the outcome of nine parliamentary votes between 2002 and 2018, including on education and equality.

The education secretary has a duty to convert schools into academies if they are deemed as failing. In 2016 the bishops' votes ensured the defeat of a clause which would have made this power discretionary.

The bishops' votes also swung the removal of a clause in the 2010 Equality Act, enabling the church to have more exemptions in its employment practices.

In the report's foreword, four parliamentarians say it "suggests ways forward for reform to make our parliament a more inclusive place and more reflective of the people it serves".

NSS chief executive Stephen Evans said the report was "a very welcome contribution to the debate about the future of the UK's constitution".

"Removing the entitlement of 26 Church of England bishops to sit in the Lords and ending the state's role in running the church are long overdue. These proposals would largely strike a blow for fairness and equality and enhance the quality of the UK's democracy."

Write to your MP: Scrap the bishops' bench