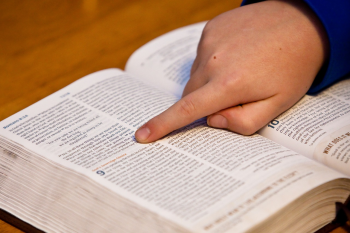 The National Secular Society has urged the Welsh government not to remove parents' right to withdraw children from religious education until the subject is fully reformed.

Education ministers in Wales are considering removing the right of withdrawal as part of a proposed new curriculum, which also proposes to rename RE as 'Religion and Worldviews' (RW).

In response to a consultation over the curriculum, the NSS said:

The NSS also called for all pupils to have an entitlement to receive "a broad and balanced education about different worldviews".

The society said there were circumstances in which the right to withdraw would "undermine children's rights to access education and to gain understanding of and respect for those with different worldviews".

But it noted that religious groups' historical and continuing influence over the way religion is taught meant there would be "significant human rights implications" to removing the long standing right.

NSS head of education Alastair Lichten said: "In principle there should be no right to withdraw from any subject.

"But RE in Wales has historically been taught in a way which promotes religion. The right to withdraw has been a crucial safeguard against this for families with reasonable objections. And reforms to the subject don't go far enough to justify ending this safeguard."

The NSS also said the subject should be renamed as 'Worldviews' rather than 'Religion and Worldviews', which still treated religion as "the default" and non-religious worldviews as "an addition or afterthought".

NSS backs end to right to withdraw from RSE

Within the consultation the NSS also expressed support for plans to end the right to withdraw from a new subject of relationships and sexuality education (RSE).

Mr Lichten said: "Lessons about relationships and sexuality promote children's health and wellbeing and the harm caused by withdrawing children from them is potentially significant, both for themselves and for others.

"It is possible that through RSE children are exposed to information and ideas which conflict with their parents' religious convictions. However, this is balanced against the child's right and significant interest in receiving a full education."

Read more: This isn't the time to end the right to withdraw from RE in Wales, by Alastair Lichten