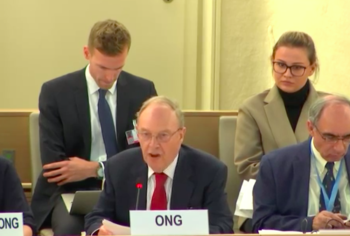 The National Secular Society has urged the UN Human Rights Council (UNHRC) to exert pressure on the Vatican to submit long-overdue reports outlining its response to child sexual abuse.

The Holy See's previous report on the same topic was submitted so late that the UNCRC's efforts to review its implementation of the convention were delayed for 14 years.

In an oral statement to the UNHRC in Geneva on Wednesday, NSS president Keith Porteous Wood called on the council and UN member states to hold the Vatican to account.

He said the reports were "urgently needed" because areas of "huge concern" had not been dealt with. These included:

He also highlighted the "huge scale" of abuse in the Catholic Church and evidence that the problem was continuing.

The concluding observations of the UNCRC's previous report, which were published in 2014, referred to the abuse of "tens of thousands of children" and the impunity of perpetrators.

The UNCRC expressed "grave concern" that the Holy See had not "acknowledged the extent of the crimes committed" or taken "necessary measures" to protect children.

It added that the Vatican had "adopted policies and practices which have led to the continuation of abuse by and the impunity of the perpetrators".

Several formal investigations in countries including the UK, Australia, the USA and Germany have highlighted similar findings.

The NSS also outlined its concerns in more detail in a formal written submission to the council.

Explaining the NSS's position, Mr Porteous Wood said: "The Vatican continues to defy reasonable requests for compliance from secular authorities, with dire results for many children and the administration of secular justice around the world.

"The UN's child rights committee severely criticised the Holy See in 2014 for failing to submit timely reports. Five years on, the next reports are already two years overdue with no sign of any change of heart.

"The victims deserve for the Holy See to act in accordance with the convention it signed. In their name we are calling for the Vatican to present its overdue reports which the UN can then examine. No state can be allowed to jeopardise child protection so brazenly without consequences."

States that ratify the UN convention on the rights of the child, as the Vatican has, are subject to five-yearly examinations by the UNCRC. They are expected to submit reports to the committee as part of this process.