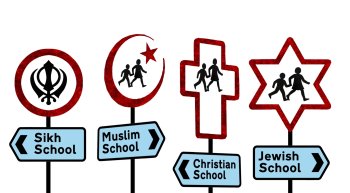 More than 20,000 children were sent to faith schools in England against the preferences of their parents earlier this month, National Secular Society research has exclusively revealed.

An NSS analysis of government data, revealed by the Department for Education (DfE) in response to a freedom of information request, has found that:

Twenty-one per cent of those who put a non-faith secondary school as their first choice and missed out on it were assigned a faith school. The corresponding figure at primary level was 14%.

"These figures show that many children are having religion pushed upon them against their parents' wishes. They add to a growing weight of evidence showing that faith schools restrict choice for many parents, adding uncertainty and confusion to an already complex admissions system.

"The best response would be to stop building new faith schools and roll back existing religious control over state schools – particularly in areas where non-faith schooling is highly restricted. This would guarantee that all children got an education which enabled them to make up their own minds about religion.

"Short of that the government must act to ensure that every child has the right to a suitable secular school within a reasonable distance. As Britain grows increasingly religiously diverse and irreligious, politicians cannot assume people will accept their children being sent to schools which endorse religion."

Last year the NSS revealed that almost three in 10 families in England lived in areas where most or all of the local primary schools were faith-based, in its groundbreaking report The Choice Delusion.