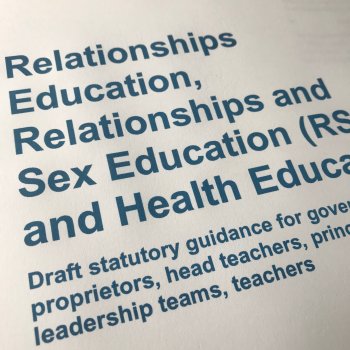 Ultra-orthodox Jewish schools are planning to refuse to teach aspects of relationships and sex education (RSE) by exploiting loopholes in Department for Education regulations, the National Secular Society can reveal.

Schools in the Charedi Jewish tradition plan to claim LGBT-inclusive teaching is not "age appropriate" and not appropriate for their pupils due to their religious background.

Charedi independent schools also plan to exploit guidance which says they will not face official action if they "only" fail to meet "one or two" of the relevant standards.

The NSS criticised the Department for Education (DfE)'s decision to introduce these loopholes last month, saying it was watering down requirements to promote respect for difference.

Legal advice received by Orthodox Jewish activist Shraga Stern, which the NSS has seen, says a legal challenge to RSE guidance on human rights grounds would have a "low chance" of success.

Stern's lawyers wrote to the DfE in January to claim that requirements to teach about LGBT people violated the Human Rights Act 1998 and the European Convention on Human Rights.

According to the advice, the rights in question are "not absolute" and the government would be able to demonstrate that the rules are "necessary for achieving a legitimate aim".

But the advice notes that government regulations require schools merely to "have regard" to relationships and sex education guidance. It says schools that did not wish to comply with guidance could "legitimately argue" they had done that if they issued a policy statement explaining their reasoning.

The advice makes a specific reference to a letter published by the DfE from the education secretary Damian Hinds on the topic. The letter says: "Primary schools are enabled and encouraged to cover LGBT content if they consider it age appropriate to do so."

It also notes that in April the DfE said schools would not "normally" face "enforcement action" if they "only fail to meet "one or two" of the school standards.

The advice recommends "a unified approach from Charedi schools" which would make it "politically unattractive for the government to take an aggressive approach to this issue".

"The more uniform and widespread the action taken, the better chance there is of the government taking a less aggressive approach and reaching a resolution amicably," it states.

The NSS understands that the advice is being distributed among both state and independent Jewish schools and their lawyers in north London.

The advice also notes that "noisy demonstrations in Birmingham" – where mostly Muslim protesters have objected to schools promoting LGBT-inclusive teaching – may "weaken the government's desire to press this issue head on".

The NSS has previously warned that DfE guidance gives religious schools too much leeway to teach RSE in accordance with their faith.

Stephen Evans, chief executive of the NSS, said: "For the sake of a quiet life, the government appears to have gifted religious authorities running schools an opportunity to evade expectations which are placed on all other schools. In doing so it has risked creating a two-tier education system that holds religious schools to lower standards and sells children from minority religious backgrounds short.

"We therefore urge inspectors to reject the soft bigotry of low expectations and instead ensure that independent school standards are consistently applied to all schools across the independent sector. We also urge the government to issue a statement making clear that all schools will be required to provide LGBT inclusive RSE and teach pupils about all the protected characteristics and the importance of respecting people who have them."

In a major report on sex education in England last year the NSS revealed that more than three-quarters of state-funded faith schools in England were failing to teach sex and relationships education impartially.