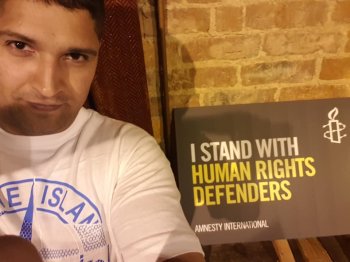 The government has told the National Secular Society it is reviewing its "decision making" after the NSS raised concerns about its use of theological justifications for refusing asylum applications.

In a letter to NSS chief executive Stephen Evans, immigration minister Caroline Nokes said the Home Office was "committed to improving the quality and accuracy of our decision making".

The letter came after a Humanist whose asylum application was initially rejected for failing to identify ancient philosophers was this week granted asylum in the UK.

The National Secular Society raised his case directly with the Home Office in a letter highlighting a series of concerns about rejections based on 'faith tests' or their equivalent.

Pakistani national Hamza bin Walayat applied for asylum in 2017, stating he had renounced Islam and become a Humanist. He said he could be executed under Pakistan's blasphemy laws.

But his application was rejected after he failed to name Plato and Aristotle during a Home Office interview in which he was asked to identify "any famous Greek philosophers who were Humanistic".

The Home Office said: "Your knowledge of Humanism is rudimentary at best and not of a level that would be expected of a genuine follower of Humanism."

Walayat appealed to the first-tier immigration tribunal but the decision was not reversed.

The NSS raised his case in one of a series of letters to the Home Office earlier this year.

The NSS said decisions regarding asylum applications "should be based on a careful assessment of the geopolitical situation in the country of origin and the evidence at hand – and not on the state's interpretation of any given religion or belief".

It also expressed concern that the case was part of "a clear pattern of the Home Office using crude 'knowledge testing'", contradicting the department's official policy.

The society also raised the rejection of an asylum claim by an Iranian Christian convert and asked the department to review its use of 'faith tests' in its handling of asylum applications.

In its rejection letter in the Iranian Christian's case the Home Office had said passages in the Bible were "inconsistent" with the applicant's claim to have converted to Christianity after discovering it was a "peaceful" faith.

The department agreed to reconsider that case amid significant public criticism from organisations including the NSS.

In response to the latest developments NSS chief executive Stephen Evans said: "We're pleased that the Home Office has looked at Hamza bin Walayat's case again after we raised concerns.

"We're keen to stress that there must be an even-handed approach to asylum applications regardless of applicants' religious outlook or identity. Asylum claims should always be dealt with on their merits, meaning the likelihood that someone will face persecution and the severity of that persecution."

On Wednesday Walayat thanked individuals and organisations including the NSS in a post on Facebook announcing that his second asylum application had been granted.

The National Secular Society has asked the Home Office to review its use of 'faith tests' in the handling of asylum applications amid concerns...

From Iranian dissidents fearing deportation after seeking asylum from theocracy, to ex-Muslims driven from their homes in Bradford, Iram Ramzan looks at some worrying examples of sectarianism threatening...