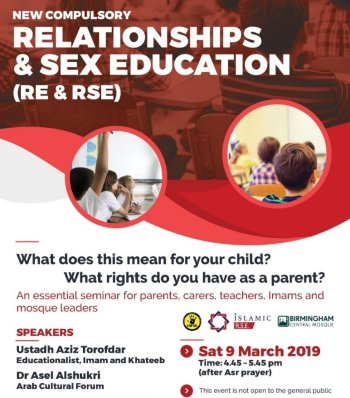 The National Secular Society has warned of a growing threat from reactionary religious campaigns against relationships and sex education (RSE) after its research highlighted the activities of an anti-RSE Islamic group.

NSS research has revealed that a group called Islamic RSE is promoting anti-LGBT, anti-sex and anti-contraceptive messages and encouraging sympathetic parents to get involved in school governance.

The group's founder has also toured the country giving talks on the issue.

Islamic RSE says it "strives to engage with Muslim communities to help guide Muslim children understand the importance of marriage and prevent them from forming sexual relationships outside of marriage".

In a document for parents the group raises a concern that RSE will "promote and normalise same-sex relationships" without giving parents the right to opt their children out of it.

It adds that the promotion of acceptance of same-sex families "disregards traditional and religious values adhered to by the many".

The document also says RSE at secondary school level presents "a skewed view of sexuality" and suggests "modern lifestyle choices" are as "valid as natural marriage".

It bemoans the lack of focus on "chastity" and says RSE promotes the message that "postmarital and extra-marital sex" are "accepted as a normal part of life".

It also says children will be given information and advice on contraceptives and abortion services "without any parental knowledge or consent" and abortion "is offered to children as an option during pregnancy".

It is encouraging sympathetic parents to demand a parental right to withdraw children from RSE and a mandate on schools to "consult parents regarding RE and RSE".

In another resource it tells parents to "find out how the school plans to take into consideration your child's religious background" before deciding which of its resources to use.

The campaign is also urging parents to request that their schools involve them in "any decision making process" and to get elected as school governors in order to "influence real change".

A report in The Times this weekend revealed that its founder, Aziz Torofdar, has spoken about RSE at mosques and schools in Birmingham, Bristol, London and Essex.

He has also organised a petition to parliament arguing that it should be mandatory for schools to consult parents before providing sex education. The petition has gained more than 15,000 signatures.

Islamic RSE is also running an event entitled 'Supporting Islamic schools to meet the new RSE legislation' next month and is encouraging "Islamic school leaders and management" to attend.

NSS education and schools officer Alastair Lichten said: "Islamic RSE's fearmongering is the latest sign that the campaign against RSE in schools is a significant threat to a tolerant society which values children's right to a decent education.

"The government must appreciate that the anti-RSE movement is increasingly potent and is having a national impact – and it needs to respond accordingly. Individual schools can't be expected to face this down on their own. The reactionaries attempting to undermine RSE need to know they will not succeed."

In February NSS research revealed that Stop RSE, a primarily Islam-based campaign which supported protests against LGBT-inclusive education at a school in Birmingham, was promoting bigoted messages.

The NSS also revealed that an academic who secured a debate on RSE in parliament had encouraged Muslims to adopt a "psychological" or "mental health" response to same-sex attraction.

Last month the NSS urged the government to reconsider a requirement on schools to take pupils' "religious background" into account when teaching about relationships as teachers reported being intimidated and criticised the government's response to the protests.

The latest revelations come amid an escalating religious campaign against LGBT-inclusive teaching and RSE, led by mainly Muslim protagonists.

Anti-RSE leafleters are targeting schools across much of England. Meanwhile increasingly intense protests outside Anderton Park Primary School in Birmingham have forced the school to close early for half term and the school's head teacher has received threats.

Islamic RSE has said it has not made contact with "those involved with any protests" and does not intend to do so in future.

Parents will have a "right to request withdrawal" from sex education in secondary schools, slightly diluting the previously explicit right to withdraw children.

Image: Flyer for event promoted by Islamic RSE and others.