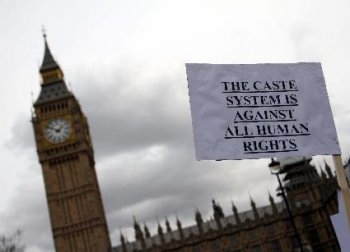 The National Secular Society has warned that guidance on the relationship between 'caste' and the 2010 Equality Act "does not do enough" to tackle the problem of caste discrimination.

The unpublished guidance, seen by the NSS, is due to be distributed by the Government Equalities Office with the aim of helping employers and organisations handle complaints regarding caste discrimination.

The guidance follows the government's announcement in 2018 that it would not explicitly recognise caste-based discrimination under the Equality Act 2010.

The announcement defied a formal UN recommendation to legislate "in accordance with the UK's international human rights obligations" and was criticised by the Equality and Human Rights Commission.

Research published on the government website has estimated that at least 50,000 (and perhaps in excess of 200,000) people living in the UK are regarded by some as 'low caste' and at risk of caste discrimination. The research found evidence of caste-based discrimination, harassment and bullying present in employment, education and in the provision of services.

However, the guidance adds that a previous case that recognised caste as an aspect of race is not "a definitive statement of whether caste is or is not within the scope of the [Equality] Act".

"It is also disappointing that the guidance does not fully acknowledge that caste discrimination exists. Referring to the existence of caste discrimination as 'strongly contested' is no doubt a bid to appease religious groups that want to deny the problem exists, or even retain social structures that give them privilege.

"Until the government fully acknowledges caste discrimination is a genuine social problem, we are unlikely to see the legislative changes desperately needed to protect people from unequal, unfair and unjust treatment."

She told BBC Radio 4 that DSN would prefer "specific legislation to protect victims of caste discrimination."

She said the guidance may eventually be "of some use" to back up legislation, but added that it could not replace "any form of legislative protection".

She also said the guidance is "not totally clear" and "not helpful to even the people they're saying it's for".

Varna was shortlisted for the NSS's 2018 Secularist of the Year award for her work tackling caste-based discrimination.

Satish Sharma, a trustee of the National Council of Hindu Temples, told BBC Radio 4 the guidance should use the word 'class' rather than 'caste'.

He said the "Hindu community" believes "there are certain general characteristics which are stronger in some people than there are in other people". He claimed that using the word 'caste' is an "attempt to denigrate" Hindus.

The National Council of Hindu Temples is a registered charity that promotes "the advancement of Hindu religion". It has been subject to multiple investigations by the Charity Commission for England and Wales for appearing to endorse political parties and hosting a speaker who has promoted extremist nationalist views.

Megan Manson added: "It is positive that the guidance does not conflate 'caste' with 'class', as some Hindu groups have demanded."