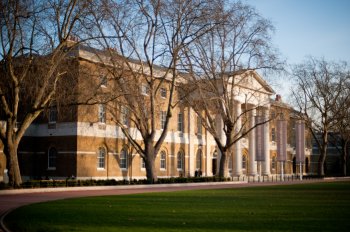 The National Secular Society has asked a major west London art gallery which covered two paintings in cloth in response to complaints from Muslim visitors to review its decision.

The Saatchi Gallery decided to cover up the paintings after visitors claimed they were blasphemous and the artist, who uses the pseudonym SKU, suggested doing so.

The gallery told The Sunday Times it "fully supported" freedom of expression but added that it "also recognises the sincerity of the complaints made against these works and supported the artist's decision to cover them until the end of the exhibition".

The paintings showed the text of an Islamic declaration of faith interwoven with images of nude women in the style of the US flag.

In an open letter to Nigel Hurst, the Saatchi Gallery's CEO, NSS chief executive Stephen Evans said the gallery had "contributed to a climate of censorship brought on by the unreasonable and reactionary views of some religious extremists".

"The fact some people take blasphemy codes seriously is not a reason for anyone else to do so. A specifically religious sense of taboo is not something that art galleries should be imposing on society at large.

"The upholding of de facto blasphemy codes under the guise of civility and politeness risks perpetuating religious taboos that violate the human right to freedom of expression and can serve to legitimise vigilantism, mob violence and persecution of those that are deemed to have broken them."

Mr Evans added that the gallery's "significant public profile" endowed it with "a social responsibility to resist demands for censorship". According to the gallery's website, 1.5m people visit it each year.

Mr Evans asked the gallery to "consider whether your approach has shown undue deference to religious sensitivities, placing unreasonable restrictions on artists' freedom of expression and the public's expectation to view artwork without the interference of censorship".

And he asked for "a commitment to review the decisions that were made in this instance in an attempt to limit the damage caused and protect free expression in future".

"The silencing of a powerful institution with a stated liberal mission will set a damaging precedent, giving succour to religious reactionaries who seek to clamp down on dissenters and free thinkers. This remains true regardless of whether the decision to cover the paintings had the consent of the artist involved."

The exhibition that the paintings appeared in, Rainbow Scenes, closed last Friday after a two-and-a-half week run.

On its website the Saatchi Gallery says it aims to provide an "innovative forum for contemporary art".

Explaining his decision to write the letter, Mr Evans said: "The Saatchi Gallery is the latest private institution to take the easy way out when facing complaints of religious offence.

"It's caved in to an unreasonable demand to infringe the right of those attending the gallery to view a piece of art. It has presented the decision as a compromise, but in reality it simply emboldens censorious religious offence-takers and encourages them to demand the silencing of more people."

The NSS campaigns for freedom of expression on religious issues and against blasphemy laws and codes.

The blasphemy law in England and Wales was repealed in 2008, after 142 years of NSS campaigning. The NSS continues to guard against de facto blasphemy codes imposed by the combination of violence, demands for 'civility' and self-censorship.

Last year the society criticised two breweries, Greene King and Mitchells & Butlers, for taking down the Saudi Arabian flag from displays to mark the football World Cup in an attempt to avoid offending Muslims.

The NSS has also spoken out on decisions such as British Gymnastics' decision to ban gymnast Louis Smith for two months for mocking aspects of Islamic belief.

Two NSS honorary associates, Nick Cohen and Pragna Patel, will address the subject of freedom of expression at the society's upcoming Secularism 2019 conference on 18 May.

Explaining his support for the Saatchi Gallery's decision to cover his works, SKU said: "It seemed a respectful solution that enables a debate about freedom of expression versus the perceived right not to be offended."