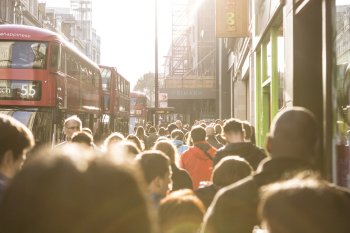 The number of people who say they are non-religious in Great Britain has risen by 46% in seven years, according to data from the Office of National Statistics (ONS).

The ONS found that the number of people who said they were non-religious in the Annual Population Survey rose from 17.1m in 2011 to 25m in 2018.

The total number of people estimated to be living in Britain rose from 60.2m to 63.5m, a rise of five per cent.

Although the ONS's figures still suggested there were more Christians than non-religious people in Britain, other surveys have suggested more than half of people in the UK describe themselves as non-religious.

In 2017 the British Social Attitudes (BSA) survey from NatCen found that the proportion of people across the UK who call themselves non-religious had risen above 50%. The 2018 BSA survey also found that 52% of people had no religion.

The difference may be accounted for by the way the two surveys ask the question about religion. The Annual Population Survey asks people what their religion is and provides them with a list of possible answers.

The BSA survey asks around 3,000 people: 'Do you regard yourself as belonging to any particular religion?' If respondents say yes, they are asked which one, without being given a list of religions.

"A fast-growing number of people in Britain consider themselves non-religious or say they belong to non-Christian religions. In these circumstances it's untenable to have a state church with representatives entitled to sit in the legislature.

"The government should take note and reconsider the opportunities which religious groups are given to impose their views in our public life. The UK should move towards the disestablishment of the Church of England, scrap the bishops' bench in the House of Lords and roll back religious groups' role in state education."