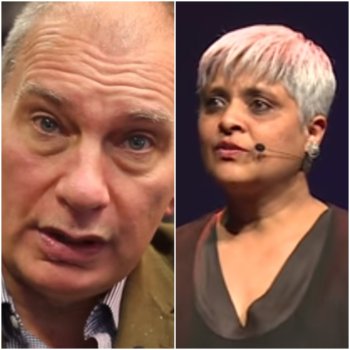 The National Secular Society is delighted to announce that Nick Cohen and Pragna Patel will address the subject of freedom of expression at its Secularism 2019 conference.

Nick is a noted journalist and author who writes regularly for publications including The Observer, The Spectator and Standpoint.

His books include You Can't Read This Book, which focuses on censorship in an age of freedom and includes several chapters making impassioned defences of free speech on religion.

Pragna is the founding member of Southall Black Sisters (SBS), which campaigns for the rights of black and Asian women. She accepted the NSS's Secularist of the Year prize on behalf of SBS in 2010.

She is also the co-founder of Women Against Fundamentalism, which formed in 1989 amid violent attempts to censor the author Salman Rushdie. She recently spoke about freedom of expression at an event to mark the 30th anniversary of the fatwa against Rushdie.

In an interview about the event last month she said freedom of speech was "necessary to secure private as well as public liberty".

Both speakers are NSS honorary associates.

"Nick Cohen and Pragna Patel are both staunch defenders of free speech on religious issues and they will be very valuable additions to our expanding line-up for Secularism 2019.

"It is particularly apt that we have such well-informed speakers ready to address this subject this year, as we mark the 30th anniversary of the fatwa against Salman Rushdie. We decided to address this topic out of concern that society has failed to learn the lessons of that affair, as religious groups engage in competitive offence-taking to silence debate.

"We very much look forward to hearing what Nick and Pragna have to say."

The other speakers at the conference will include Sara Khan, the lead commissioner for countering extremism; medical ethicist Dr Brian Earp, who will address ritual genital cutting; and Dr Ahmed Shaheed, the UN's special rapporteur on freedom of religion or belief.

Rachel Laser, from Americans United for Separation of Church and State, will deliver a keynote speech discussing the organisation's work defending religious freedom and church-state separation in President Trump's America.