NSS: government must push Vatican to cooperate with abuse inquiry 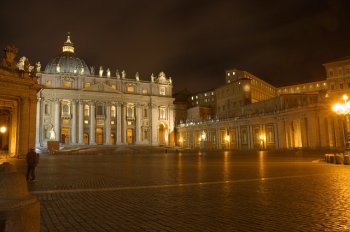 The National Secular Society has urged the prime minister to raise the Catholic Church's failure to cooperate with a major child abuse inquiry with her counterpart in the Vatican.

The NSS made the call after a papal representative was accused of "hiding behind his diplomatic immunity" to avoid providing evidence to the Independent Inquiry on Child Sexual Abuse (IICSA).

IICSA has written to archbishop Edward Adams, the papal nuncio in Britain, several times to request a statement on abuse in Catholic schools, but has received no response.

The statement requested by IICSA would specifically relate to investigations into abuse at Ealing Abbey and the affiliated St Benedict's school in west London. On Monday the inquiry began a five-day hearing into abuse in Ealing.

Riel Karmy-Jones QC, counsel to IICSA, said the inquiry had asked for a "voluntary statement" on the handling of complaints about Catholic schools in England and Wales.

Karmy-Jones said the inquiry had received "confirmation that its request was being carefully considered" but no statements or "substantive responses".

IICSA's chair has the power to call evidence and can usually ensure those who defy a request go to prison, but Adams is covered by diplomatic immunity. The Vatican's representatives are treated as diplomats due to its status as an independent country.

The NSS's president Keith Porteous Wood has now written to Theresa May to encourage her "to bring all the pressure you can" to ensure the Catholic Church "cannot refuse to be held to account".

"We request you to write to your counterpart in the Vatican to urge it to take seriously the Catholic Church's duty of care to protect children from sexual abuse in England and Wales by providing the information sought by IICSA.

"While we recognise that the Vatican, as a sovereign state, can refuse, it cannot do so while maintaining any credibility of remorse for the scale of past abuse or any willingness to rectify it. The repeated apologies about clerical abuse given by Catholic leaders, including the pope, are meaningless unless backed up by action."

The Vatican decreed in 1962 that it would hold all information about clerical abuse in the Catholic Church globally. The decision has made it particularly difficult for the authorities in several countries to investigate abuse.

In 2011 a report revealed that the Catholic Church had frustrated inquiries into child sexual abuse in Ireland, leading to blistering criticism from the Irish prime minister. The Vatican's embassy in Ireland was closed shortly afterwards, reopening 26 months later.

The Vatican also refused permission for a senior official to give evidence at the trial of Philippe Barbarin in Lyon last month.

Explaining his decision to write the letter, Mr Porteous Wood said the government "must ensure the Catholic Church realises the consequences of failing to comply with inquiries into child sexual abuse".

"Once again the Vatican is brazenly hindering efforts to bring justice to child abuse survivors and prevent their ordeal from being repeated. This should be shocking but the sad reality is that this is the Catholic Church's normal response.

"Any state which defied eminently reasonable requests to help the authorities to investigate and prevent such crimes would suffer significant consequences, and the Vatican should be no exception."

This week David Enright, a prominent lawyer representing victims of abuse in Catholic schools at IICSA, said he had urged the prime minister to expel Adams if he fails to cooperate with the inquiry.

In his opening statement, Enright said Adams had shown a "flagrant disregard" for the inquiry.

"Rather than answer [the inquiry's] requests for evidence, the nuncio, secreted in his papal residence in Wimbledon, first hid behind his diplomatic status and then simply refused to even acknowledge the repeated and ever more urgent letters.

"The penalty for failing to comply with a notice from the chair [of the inquiry] is up to 51 weeks' imprisonment. The papal nuncio needs to know that he has only three options: offer up the evidence, face criminal prosecutions or face expulsion from the UK."

Richard Scorer, an NSS vice-president and a specialist abuse lawyer at the law firm Slater and Gordon, told the inquiry: "It is absolutely outrageous that the papal nuncio seeks to hide behind diplomatic immunity to avoid giving information to the inquiry. Yet again it shows the Vatican stalling and covering up scandal and gives the lie to their claims of change."

IICSA's hearings have heard that children at St Benedict's were often subjected to sexual assaults during corporal punishment, forced to perform sexual acts and raped.

The hearings form the second part of IICSA's investigation into the English Benedictine Congregation (EBC), a Catholic monastic order. Last year the inquiry published a report on the sexual abuse of children at Ampleforth and Downside, two leading Catholic schools also run by the EBC.

On Monday Ruth Henke QC, speaking on behalf of Ealing Abbey Monastic Community, told the inquiry: "I offer a sincere, unreserved and profound apology to each and every survivor. For all the harm caused to survivors, we are truly, truly sorry and will never cease saying sorry."

And Christopher Jamison, abbot president of the EBC, said: "I am truly sorry for what has happened and apologise unequivocally to all those who suffered and were abused by anyone connected with our abbeys and schools."