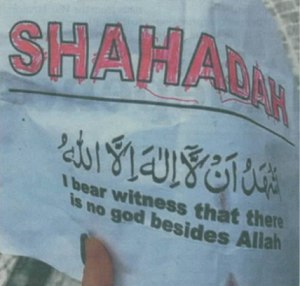 The National Secular Society has called for improved vetting and standards for religious education resources after parents accused a school of handing religious "propaganda" to pupils.

Parents at Cronk y Berry Primary School on the Isle of Man complained after five and six year old pupils were sent home with a colouring sheet featuring the Islamic creed "I bear witness that there is no god besides Allah".

Headteacher Rob Sellors apologised in a letter to parents which said: "Several RE work sheets about the Muslim faith (for eight-and nine-year- old pupils in year 4) appear to have made their way into a classroom in Year One."

He added: "They were not intended to be used with pupils in KS1 as they are not considered age- appropriate by the school."

A parent told the Manx Independent: "We are mortified that this type of propaganda has been given out by teachers to year one students, at five and six years of age." Another local parent told the NSS he was "alarmed" at the way religion was being presented to pupils.

NSS head of education Alastair Lichten said: "We see similar situations in schools across the UK where many resources are produced and delivered by evangelical and religious interest groups. The low status and unclear purpose of RE means the subject is readily exploited by groups seeking to promote their particular beliefs in schools.

"There's no reason to doubt the school's good intentions, and the headteacher has acknowledged this material wasn't suitable for Year One pupils. But parents will be entitled to wonder what use or purpose it has for Year Four pupils."

This is not the first time that concerns have been raised regarding inappropriate external resources and groups in Manx schools. In 2017 the Isle of Man's education minister defended allowing an evangelical Christian group to deliver abstinence-based sex education to Year 10 pupils.

Mr Lichten said, "External resources can enrich subjects for many students and it's understandable that groups want their worldviews to be understood. Unfortunately, too much of what passes for educational resources produced by faith groups is simply advertising material or rose-tinted accounts. When you combine this with RE teachers who too often see their role as promoting positive accounts of religions, students are poorly served and the subject's reputation suffers."

A recent survey of 465 RE teachers found that 60% "absolutely agree" that "religion should be taught in a positive way in RE".

"Teachers should ensure resources aren't just advertising religion, that they serve genuine educational purposes and that they are used appropriately. We should be worried when teachers – particularly non-specialists – are over reliant on external resources or using them as a crutch."