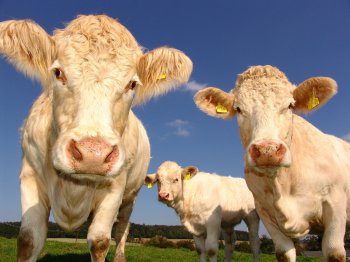 Meat from animals slaughtered without pre-stunning does not meet sufficiently high animal welfare standards to be labelled organic, the European Court of Justice has found.

The court said scientific studies had shown that pre-stunning "compromises animal welfare the least at the time of killing".

It said slaughtering animals without stunning is "insufficient to remove all of the animal's pain, distress and suffering as effectively as slaughter with pre-stunning".

It also said religious non-stun slaughter methods were "not tantamount, in terms of serving a high level of animal welfare at the time of killing, to slaughter with pre-stunning".

It said slaughter without pre-stunning requires an accurate cut of the throat with a sharp knife to minimise the animal's suffering. But it added that this technique does not "allow any suffering to be kept to a minimum".

The National Secular Society said the UK government should "take note" of the ruling. In the UK, all animals must be stunned before slaughter but exemptions are given to animals slaughtered to meet Jewish or Muslim dietary preferences.

The case was brought by a French animal welfare group concerned by non-stun halal beef being labelled organic. The ruling means the EU's organic production logo cannot be placed on meat derived from non-stun slaughter.

European Council regulations require "the application of high animal welfare standards" for products to be labelled organic. They also say "any suffering, including mutilation, shall be kept to a minimum during the entire life of the animal, including at the time of slaughter".

The court said it was "important to ensure that consumers are reassured" that products bearing the organic logo "have actually been obtained in observance of the highest standards, in particular in the area of animal welfare".

The ruling contradicts the opinion given by EU advocate general Nils Wahl in September that the 'organic farming' certification "cannot be refused to products from the slaughter of animals without stunning".

"By withholding the organic label from meat derived from non-stun slaughter, the Court of Justice is ensuring animal welfare standards are kept at the heart of this accreditation.

"Consumers can continue to trust that meat bearing this logo is from animals that have been given the highest standard of care, including at the point of slaughter.

"The UK government needs to take note of this ruling and acknowledge the importance of consumer choice. Meat from unstunned animals is still being supplied to the general public without any information about the method of slaughter. As a minimum, meat from animals slaughtered without stunning must be labelled as such to give consumers a genuine choice.

"The government should also note the EU's acknowledgement that non-stun slaughter objectively causes unnecessary suffering. For this reason, the UK should follow the example of other countries around the world that have banned non-stun slaughter."

Non-stun slaughter is banned in a number of EU countries, including Austria, Denmark, Estonia, Finland, Greece, and Sweden. In January a ban on non-stun slaughter came into effect in the Flanders region of Belgium.