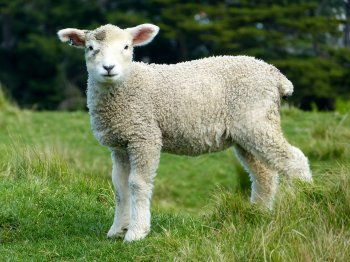 Animal welfare advocates are urging the environment secretary to repeal an exemption which allows animals to be slaughtered without pre-stunning for religious reasons.

The Royal Society for the Prevention of Cruelty to Animals (RSPCA) and the British Veterinary Association (BVA) have made the call in an open letter to Michael Gove.

The letter, which the groups are urging members of the public to sign, says: "All animals should be stunned before slaughter. No exceptions.

"Scientific evidence clearly indicates that slaughter without pre-stunning can cause unnecessary suffering.

"The level of restraint required to hold an animal still, expose the throat, and perform an effective neck cut is typically greater than that needed for stunned slaughter. When the neck cut is performed it triggers a barrage of sensory information to the brain in the conscious animal."

Official figures have revealed that over 120m animals were slaughtered without being pre-stunned between October 2017 and September 2018 – more than three animals slaughtered every second on average.

The welfare groups' letter also says that while the exemption exists the government should take a series of steps to mitigate the harm it causes. These include a requirement to stun cattle, sheep, goats and deer after they are cut to reduce their suffering and the introduction of method of slaughter labelling on meat and fish.

They also include the end of exports of non-stun meat, measures to ensure supply meets demand and measures to improve transparency.

The letter also calls on the government to release the results of a comprehensive survey of slaughterhouses form the Food Standards Agency (FSA) "without delay". The results were due for release in autumn 2018.

The survey provides detailed information on the number of animals in England and Wales slaughtered with non-stun methods and includes data on the level of exports.

BVA president Simon Doherty said: "The UK government has repeatedly stated it would prefer to see all animals stunned before slaughter but has taken no action to address this critical welfare issue that affects millions of animals every year.

"It is doubly disappointing that data that would have provided a valuable benchmark for levels of non-stun slaughter in the UK has yet to see the light of day despite assurances throughout last year that it would soon be made public.

"There is a huge groundswell of support for a ban on non-stun slaughter, and recent developments in Belgium show that decisive change is possible where public support is matched by political will. Michael Gove has made clear that he wants to maintain and build on the UK's reputation as global leader on animal welfare; banning non-stun slaughter is a surefire way of showing he will deliver on this commitment.

"If slaughter without stunning continues to be permitted in the UK, then meat and fish from this source must be clearly labelled, to help customers make informed choices about the food that they buy and eat."

RSPCA chief executive Chris Sherwood said: "Our concern does not relate to the expression of religious belief but the welfare of animals.

"Until there is a change in the law to end non-stun slaughter, there are several measures the UK government could introduce to reduce the suffering involved in this practice."

The letter raises similar concerns to those which the National Secular Society outlined in a letter to the government in November 2018. The NSS called for the repeal of the religious exemption to the animal welfare laws and a requirement to label non-stun meat while the exemption is in place.

Responding to the RSPCA and BVA's letter, NSS spokesperson Chris Sloggett said the government should "listen to the informed opinion of experts on the subject".

"Once again we are reminded that the scientific evidence shows that non-stun slaughter is inhumane. The government should listen to those who know what they are talking about. Vets and scientists' views on animal welfare should take priority over the concerns of clerics.

"The religious exemption to the animal welfare laws should be repealed. Short of that, there are several steps – particularly method of slaughter labelling – which could increase transparency, improve consumer confidence and stem the supply of non-stun meat.

"The RSPCA and BVA's sole concern is understandably animal welfare, and they have the weight of evidence on their side. But we would also add that this is an issue of one law for all. The general restriction on non-stun slaughter is a reasonable law, so it should apply equally to everyone."

The most up-to-date figures show that 11% of poultry were slaughtered without pre-stunning between October 2017 and September 2018. That figure remains substantially higher than it was in 2013, when it stood at three per cent.

The NSS wrote to the environment secretary to express concern about the sharp rise in the number of animals being subjected to non-stun slaughter in October 2017.

In October 2018 the NSS revealed that at least 17 councils across the UK supply non-stunned halal meat to at least 140 schools.

The RSPCA and BVA's letter has drawn a backlash from the kosher meat industry. Shimon Cohen, the campaign director of Shechita UK, accused the groups of sounding like a "cracked record".

His remarks strike a contrast with his words last month, when he said animal welfare groups' welcoming of legislation to end non-stun slaughter in parts of Belgium was "understandable". Those comments came as a preface to criticism of secularist and humanist campaigners who had also welcomed the legislation.