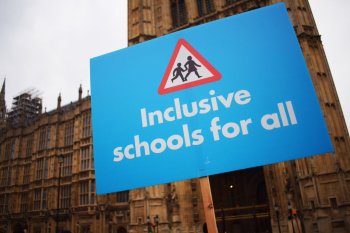 The National Secular Society has urged councils to support inclusive schooling and not to open faith schools which can select all their children based on their families' faith.

In a letter to all local education authorities (LEAs) in England NSS chief executive Stephen Evans called on the councils to resist proposals to open new voluntary aided (VA) schools.

VA schools are allowed to select all their children on a faith basis, select teachers on religious grounds and teach denominational religious education.

The government announced the details of a new wave of VA schools in November.

Mr Evans said LEAs should "prioritise the importance of inclusive schools in all decisions".

The NSS added that it would support LEAs if England's schools adjudicator attempts to override their opposition to new faith schools.

The letter also urged councils to monitor the impact of faith-based education on school choice in the wake of the publication of the NSS's recent report The Choice Delusion. The report found that almost three in 10 families in England live in areas where most or all local primary schools are faith-based.

The NSS noted that there was "little interest" in creating VA schools from local authorities. But it said few local authorities "explicitly seek inclusive schools modelled on a community school ethos" when identifying the need for new schools. This can mean the government selects faith-based providers who undermine inclusion and choice.

The NSS also called on LEAs to review policies which allow voluntary controlled (VC) schools – schools where they, rather than religious groups, control admissions – to select pupils on religious grounds.

Mr Evans wrote: "Schools with mixed intakes and without religious barriers to entry are more representative of the communities they serve."

Religious selection is far rarer in VC schools than in VA schools.

Explaining the decision to write the letter, Mr Evans said: "Councils should promote inclusive education where children from different faith and belief backgrounds are educated together.

"We encourage supporters to ask their local representatives what they are doing promote inclusive, secular education and to lobby for local action plans."

In 2017 a consultation by Hackney Council in London revealed extensive support for inclusive secular education, with just six per cent of residents supporting denominational schooling. Respondents felt Hackney's state schools had "comparatively low segregation between pupils from different backgrounds" and this should "be safeguarded by the local authority".

Update: In December the No More Faith Schools campaign reported on a government equality impact assessment on possible new voluntary aided faith schools which may be approved by local authorities. The government's assessment found that the new schools are likely to disadvantage families and teachers who don't share the schools' faith.