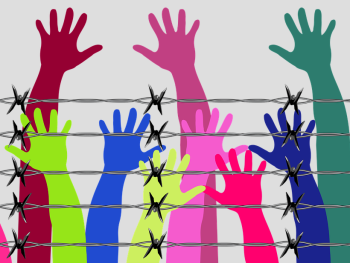 A report from the all-party parliamentary group (APPG) on freedom of religion or belief (FoRB) highlighted violations of religious freedom in 27 countries to mark Human Rights Day on 10 December.

In the report's foreword Dr Ahmed Shaheed, the UN special rapporteur for freedom of religion or belief, called the subject "a critical issue of our time".

Dr Shaheed is among the scheduled speakers at the National Secular Society's Secularism 2019 conference in London on 18 May. The conference will focus on the topic of reclaiming religious freedom.

The report highlighted the threat posed by blasphemy laws in Afghanistan, Bangladesh, Egypt, Iran, Iraq, the Maldives, Pakistan, Saudi Arabia, Sudan and Yemen. In several of these countries it said the threat of blasphemy laws was growing and they were being used to harass religious minorities.

It also raised the restrictions which 'caste' systems placed on the rights of Dalits, who are considered to be of a lower 'caste' by some Hindus, in Bangladesh and India. In India the report said "Christian and Muslim Dalits are doubly vulnerable as they suffer persecution for their religion as well as their class". The UK government has been resisting efforts by the NSS and other human rights campaigners to make discrimination based on the idea of 'caste' explicitly outlawed in UK equality legislation.

The report highlighted discriminatory laws, such as those used to persecute Sunni Muslims and Bahais in Iran. It said Shia Muslims in Saudi Arabia face "intense discrimination". It also raised the impact of discrimination in Afghanistan, Bangladesh, Burma, Egypt, Indonesia, Iraq, the Maldives, Pakistan, Somalia, Turkey and Yemen.

It also highlighted the "extreme persecution" of the religious, particularly Christians, in North Korea, and the authoritarian crackdown on religious groups in China.

It said laws to prevent religious conversion and inter-religious marriage also posed a threat to religious freedom in several countries.

The report recommended a series of steps that the Foreign Office should take to bolster the UK's response to the abuses it had identified, including by ensuring better training provision.

Dr Shaheed said the report showed "the inherent interconnectedness of every person's right to FoRB with other fundamental human rights".

NSS spokesperson Chris Sloggett said the report acted as "a reminder of the need to promote the separation of religion from state".

"A common theme in this report is that when politicians take a particular view of religion and enact it in law, they undermine fundamental rights. And when they recognise people according to the religious groups they do or don't belong to, they undermine the right to be treated equally under the law.

"The Foreign Office should do all it can to promote genuine religious freedom– a qualified right which belongs to everyone equally – as consistently as possible.

"Many of the violations outlined in this report are far worse than anything seen regularly in the UK. But it's worth noting that the government could enhance its diplomats' negotiating position by promoting secularism at home."

Twenty-one of the countries in the report are on a Foreign Office human rights priority list. The list is drawn up according to the gravity of the human rights situation, the country's trajectory and the UK's ability to influence matters.