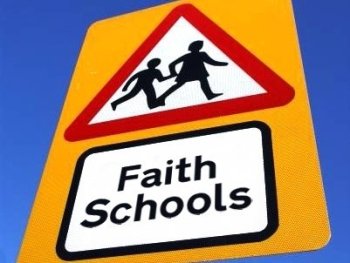 The National Secular Society has again said the government should monitor faith-based impositions on school choice after the revelation that 55% of maintained rural English primary schools are faith schools.

NSS analysis of a Department for Education (DfE) list, which was updated on Monday, has revealed that 1,930 of England's 3,541 local authority-run rural primary schools are faith schools.

Almost 1,800 of those schools were run exclusively by the Church of England, with a further 14 run by the C of E jointly with the Methodist Church or United Reformed Church.

Ninety-four were Catholic schools, 24 had a different Christian designation and two were Jewish.

Fifty-five per cent of schools on the government's list are voluntary aided (VA) or voluntary controlled (VC). Almost all VA and VC schools are faith schools. Some schools which do not have an officially designated religious character are also run according to a faith ethos.

Almost 1,200 of the 3,541 schools designated as rural were VC, while 757 were voluntary aided. One hundred and sixty-five (five per cent) were foundation schools, some of which were faith schools.

Scheduled school closures may also make the relative shortage of secular schools in rural areas more acute. Ninety-three of the schools on the list are proposed to close, a majority (52) of which have no religious character.

Local authorities are legally bound to consider the impact of designated rural primary school closures on local communities, including by considering what alternatives are available.

The data supports the findings of the NSS's recent report The Choice Delusion, which found there were 'high' or 'extreme' restrictions on secular schooling in 43% of rural areas.

The NSS's report revealed that almost three in 10 families across England live in areas where most or all of the closest primary schools are faith schools. Families in rural areas were worst affected by the lack of secular education provision. Almost 8,000 families who missed out on their first choice of a non-faith primary school in September 2018 were assigned a faith school.

The NSS found that 53% of rural primary schools in England are faith-based. Its analysis included academies.

A common complaint among rural families was that the only school in the village was a faith school.

One parent told the NSS: "Too frequently you have to either send your child to a school miles away from your home, or send them to your local faith school and have them be educated about things you do not believe in."

Another said: "I work in a village VC school and have seen the pressure to evangelise to children rising. It's even worse in VA schools. I wouldn't want my child to attend a faith school but might have no choice if I lived in a village."

After publishing the report the NSS wrote to the DfE to urge it to monitor faith-based restrictions on school choice and suitability and ensure all parents have reasonable access to a non-faith based school.

NSS education and schools officer Alastair Lichten reiterated the call in light of the DfE's figures.

"Our analysis of these figures is a stark reminder that many rural families cannot reasonably access religiously-neutral education for their children.

"As a first step the government must ensure it takes reasonable steps to protect families' ability to send their children to secular schools. In the longer term the government should place a moratorium on the opening of new schools and then roll them back so all state-funded schools are free from religious control and discrimination."