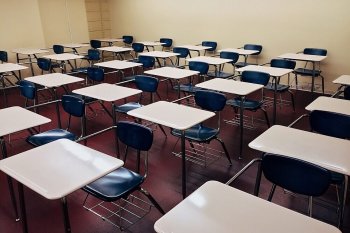 An independent Orthodox Jewish school in north London that prevents pupils from gaining GCSEs by censoring resources has been given a damning inspection report and a government warning notice.

Leaders at Bnois Jerusalem Girls' School in Hackney arrange for all textbooks and other resources to be censored before pupils get them, according to a report from the education watchdog Ofsted.

The school's June Ofsted report said images and text "deemed not to be in line with the traditions and religious teaching of the Jewish faith" were "redacted or covered over with blank paper". Pupils were "often unaware" of the censorship because the censored worksheets are photocopied.

Ofsted said this had a "negative impact" on pupils' learning and pupils were unable to sit external GCSEs or other qualifications as a result.

The inspectors said pupils sat internal school exams "made up of censored past papers" but the results had "no value outside of the community". The report said this process denied pupils "equality of opportunity" as it did not enable them to progress to a school or college of their choice.

The school was rated 'inadequate' in all areas. Other failings identified by Ofsted included leaders not encouraging "respect for all groups who share protected characteristics" and "ineffective" safeguarding.

The report also noted that inspectors were unable to speak to pupils because parents had withdrawn consent. This meant the school was unable to provide all the evidence needed in a number of important areas.

In response to the school's "serious regulatory failings", the Department for Education (DfE) issued it with a warning notice in November. The DfE published the notice on Thursday.

Bnois Jerusalem was one of eight independent faith schools to be issued warning notices in November.

Three more of these schools were Jewish schools in north London. Lubavitch Senior Boys' School, another Orthodox school in Hackney, was also rated "inadequate" in all areas by Ofsted. Its June inspection report said safeguarding was "not effective", pupils' welfare was "inadequate" and the curriculum was "unbalanced" because most of the school day was dedicated to religious studies.

Ofsted inspectors were only permitted to speak to three pupils at Wiznitz Cheder School, also in Hackney, as parents and carers of all the other children had withdrawn consent. The school's June report said its "narrow curriculum" and "very limited schemes of work" meant pupils were "ill-prepared for life in British society". Additionally, leaders failed to "encourage respect or appreciation of a range of cultures other than their own".

Beis Medrash Elyon in Hendon was criticised for a lack of "breadth and balance" in the secular curriculum, a lack of "impartial advice" about future careers, and "insufficient opportunities" to learn about life in Britain.

At the School of the Islamic Republic of Iran, located in Brent in north London, inspectors found that achievement in all subjects was "weak". Safeguarding was "not effective" and pupils were not given work that will prepare them for the next stage of their education.

Ofsted found resources at Birmingham Muslim School were "not ideal" and that at times pupils repeated work they could already do rather than moving on to more demanding work. The report also noted that a member of staff had been issued with an interim prohibition from teaching order since the previous inspection.

Bhaktivedanta Manor School, an ISKCON ('Hare Krishna') school in Watford, had a "poor culture of safeguarding", according to an inspection report issued in September. The report added that the school's leaders had a "vastly overinflated view of the school's effectiveness".

An Independent Schools Inspectorate report into Derby Grammar School, a Church of England school, found that the school failed to check all staff from barred lists or give appropriate safeguarding training to all staff. It added that staff did not always act on safeguarding concerns appropriately.

Alastair Lichten, education and schools officer at the National Secular Society, said these schools "can be added to the spiralling list of independent faith 'schools' found to be totally inadequate".

"The descriptions of censorship, narrow curricula, misinformation, unqualified teachers, inequity, incompetence and isolationism will be all too familiar to those who follow this subject.

"Schools should be engines of opportunity, not incubators of ignorance and factories of segregation. Censoring information and inculcating narrow worldviews, without fostering the critical thinking necessary for young people to make up their own minds and choose their own futures, violates the most fundamental values of education.

"Where school leaders are hostile to inspections and actively thwarting efforts to improve, alarm bells should certainly be ringing. Where faith is prioritised over education, it is little wonder schools lack the capacity for the most routine safeguarding processes.

"The schools may be private institutions, but we all fail as a society if we do not protect children's welfare and basic rights no matter what school they attend."