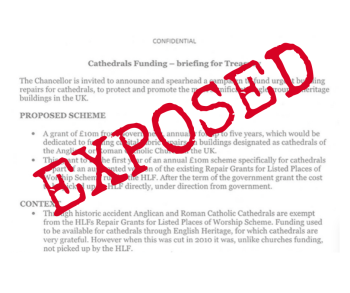 The government allowed the Church of England to spend £40m of taxpayers' money on cathedral repairs without subjecting it to proper scrutiny, research by the National Secular Society has revealed.

NSS freedom of information (FoI) requests have highlighted the failure to hold the church accountable for its handling of money given out under the first world war cathedral repairs fund.

The research also reveals that the government put inaccurate, unverified figures on the parliamentary record as a result.

The fund was created by chancellor George Osborne in the 2014 Budget. It was initially worth £20m. The government doubled its funding in 2016.

NSS treasurer Ed Moore and communications officer Chris Sloggett outlined their findings in detail in a blog on Medium.

Their research shows that the church was not required to make a business case before it was given the money, as bidders for public funds usually are.

The government also allowed the church's archbishops' council to administer the fund to save £500,000 in administration costs. Putting a CoE body in charge of the project created a conflict of interests and undermined any prospect of the scheme being subject to independent oversight.

The Treasury made this decision despite objections from the Department for Digital, Culture, Media and Sport (DCMS), which wanted English Heritage to run the scheme.

Once the money had been granted the government failed to press the church to justify its expenditure or provide independent verification that it was being reported accurately. The church did not issue yearly reports detailing its expenditure, signed off by an external auditor, or accurate quotes in advance of work to be done. It was required to do so in its grant contract with the government.

DCMS and the National Audit Office (NAO) failed to follow up on these requirements. This allowed the archbishops' council to reallocate money which was not needed for the repairs it was earmarked for, rather than returning it to the public purse.

The NSS obtained much of its information from FoI requests to DCMS, the NAO and the Treasury.

Mr Moore and Mr Sloggett said the "shoddy episode" had shown "what the Church of England's established status allows it to do".

"The political power and prestige the Church of England gains from its established status makes this possible. It benefits from the cosy relationship between church and state – and is easily able to abuse its position at the public's expense."

They said there was little evidence of the scheme's relevance to the first world war's centenary and suggested the government had "used the war commemorations as a convenient pretext to give the church money".

The NSS previously wrote to the NAO to highlight concerns about the fund. The NAO then investigated the fund's handling and identified "a number of areas for improvement" in its "governance, operation and oversight".

Earlier this year the NSS also raised concerns with the government that the church could easily afford to fund its own repairs.

The C of E's fragmented financial structure makes calculating its total wealth difficult, but it is thought to hold assets in excess of £15bn. Its church commissioners have an £8bn investment portfolio. It also has £4.7bn in dioceses, £1bn in cathedrals and an estimated £1-10bn in parish church councils.

Despite this at least £810m of public money has been channelled into the church via government and lottery sources since 1999.

The NSS has also previously shown that the first world war cathedral repairs fund acted as an opportunity for Anglican archbishops to engage in a power grab.