Let children make their own minds up about religion, says report 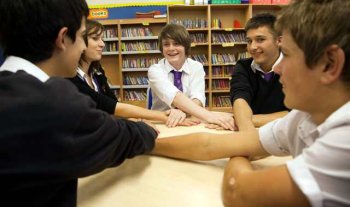 The National Secular Society has welcomed an academic report which calls on English state schools to raise children in a religiously neutral manner.

The report 'How to regulate faith schools', which will be launched at the UCL Institute of Education in London tonight, says schools should not be allowed to teach religion "directively".

The report calls for a ban on confessional religious instruction and acts of school-directed worship during school hours. It argues that schools should be allowed to have a faith ethos provided they do not guide their students "in their direction to such an extent that it threatens their autonomy".

The authors, from the University of Warwick and University College London, write that it is "important for individuals to decide for themselves what kind of life to live and to reflect and act upon those decisions in a well-informed manner".

"There should be no classes that encourage children to believe that they are duty-bound to worship God, that Jesus is the son of God whose crucifixion and resurrection redeemed mankind, that Allah is the one true God and only He is worthy of worship, or that there is no God and human beings can only find ethical and spiritual fulfilment without belief in a divinity."

The report adds that schools should introduce "a universal entitlement to an adequate programme of civic, religious, ethical and moral education", to be known as CREaM.

The proposed CREaM syllabus would "explicitly place religion alongside a broader education in citizenship, ethics and morality".

"Non-directive" religious education would be part of CREaM. Its purpose would be "to equip children with the understanding and capacity to decide for themselves what gods (if any) there are and what goals and relationships are worth pursuing".

The report calls for the 50% cap on faith-based admissions which currently applies to new faith schools to apply to all state-funded faith schools. Earlier this year the government decided not to lift the 50% cap after vigorous campaigning by the NSS and others.

Alastair Lichten, the NSS's education and schools officer, said the proposals "are largely a welcome dose of common sense".

"Education should value individual autonomy and give children the tools they need to make informed decisions, including about religion. This report has recognised that and the proposals would certainly represent a welcome change if adopted.

"The state should put children's independent rights ahead of the interests of religious leaders. Ending collective worship and teaching about religion in an informed rather than a confessional manner would both strike major blows in favour of that. And the proposals for change beyond the state sector are sensible and balanced.

"While the report is practical and recognises where we are rather than a theoretical ideal, it doesn't shy away from challenging the entrenched interests of the faith school lobby. While the proposals to remove faith schools' special privileges would mitigate much of the harm they do, it's difficult to see what role they could really play in a truly religiously neutral education system."

The NSS has long campaigned for the end of compulsory worship in schools. Under the law state schools in England and Wales are required to ensure children take part in worship on a daily basis.

The NSS calls for reform of RE so children have a national entitlement to a broad, balanced education about religion and belief. Last month a major report by the Commission on Religious Education called for RE to be replaced by a subject entitled 'Religion and Worldviews'.

Mr Lichten said: "High quality education about worldviews (religious or otherwise) may well be best delivered as part of the proposed CREaM syllabus."

The NSS's No More Faith Schools campaign calls for the end of state-funded faith schools.

The report said the proposals were "grounded in a normative framework of basic values" and "explicitly" appealed to "philosophical principles".

"Some will doubtless regard our proposals as reflecting a secular worldview, suspecting us of being hostile to religious believers… But schools that do not direct children towards particular religions are not anti-religious, and antipathy towards religion plays no role in our thinking."

The report was written by Professor Adam Swift, of University College London, and University of Warwick academics Dr Ruth Wareham, Professor Matthew Clayton and Professor Andrew Mason. It has been published by the Philosophy of Education Society of Great Britain.