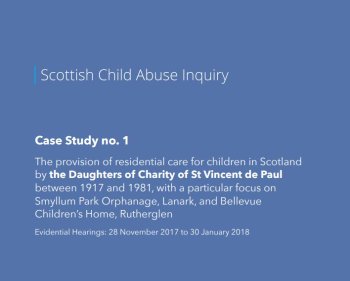 Ten people are taking legal action against a religious order which ran two orphanages in central Scotland where large numbers of children were subjected to physical and sexual abuse.

The former residents of Smyllum Park near Lanark and Bellevue House in Rutherglen are taking legal action against the Sisters of Charity of Saint Vincent De Paul over alleged abuse.

The group, also known as the Daughters of Charity, is a Catholic Church-run society for women and a registered charity with an income of over £8m.

In an interim report published last week the Scottish Child Abuse Inquiry said children at the homes were beaten with hairbrushes, leather straps and crucifixes. Children at Smyllum were sexually abused by priests, a trainee priest, nuns, members of staff and a volunteer.

The report added that children were humiliated, abused for having Protestant or Jewish heritage and routinely punished excessively or arbitrarily. It also highlighted cases where children had died at Smyllum.

Last year the inquiry said it would investigate claims that at least 400 children from the home were buried in a mass grave nearby.

Lady Smith, the inquiry's chair, described the homes as "places of fear" where the children found "no love, no compassion, no dignity and no comfort". The inquiry had heard evidence from 54 witnesses about their experiences at the homes.

The solicitors firm Thompsons said it was pursuing 10 cases, adding that "many more" are likely to launch court action.

Between 1998 and 2002, 121 complaints of alleged historical abuse at Smyllum were made to the order, with 26 complaints about abuse at Bellevue in the same period.

In August 12 people were arrested in relation to historical abuse at Smyllum.

After the publication of the inquiry's report the Daughters of Charity said: "We most sincerely offer our heartfelt apology to anyone who suffered any form of abuse whilst in our care."

The National Secular Society campaigns for victims of child abuse to have access to secular justice throughout the UK and internationally. The NSS also calls for measures to tackle cover-ups of child abuse in religious institutions, including laws mandating the reporting of abuse.

The Scottish Child Abuse Inquiry was set up in 2015 to investigate historic child abuse within care establishments in Scotland.

Last month it announced that it would investigate a number of residential care establishments run by male religious orders.

Its upcoming hearings will scrutinise schools run by the Order of Benedictines, the Marist Brothers and the Christian Brothers. The inquiry will later look at the provision of care by the De La Salle Brothers. All of these are Catholic groups.

Read more on Smyllum: The legacy of decades of abuse in a Catholic children's home, by Mark Boules for the NSS