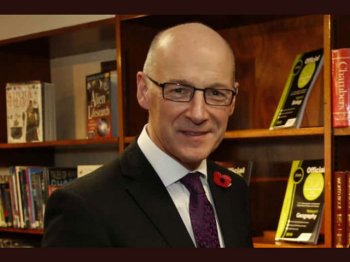 Scotland's education minister has told the National Secular Society his government has "no plans" to roll back religious schools – as a poll shows Scotland becoming increasingly irreligious.

John Swinney, who is also the deputy first minister, told the NSS that the government had no plans to stop supporting denominational schooling, or to restrict such schools' ability to discriminate in terms of religion when appointing staff.

His letter comes as a poll found that almost 60% of Scots were non-religious, including almost 70% of 18-24 year olds.

The poll, by Survation on behalf of the Humanist Society Scotland, found that 37% of Scots call themselves Christians, of whom more than half (58%) say they belong to the Church of Scotland.

The poll found that 53% of Scots say they never pray and 60% only ever attend church for weddings, funerals and other special occasions. A majority (51%) do not believe in an afterlife.

The north-east of Scotland contained the most non-religious people (66%). In Glasgow the figure was 55%.

Alastair Lichten, the NSS's education and schools officer, said the Scottish government was "out of touch with the wishes of most Scots" and "pouring fuel on the fire of sectarianism just as a chance to tackle it is emerging".

"Inclusive, non-discriminatory, non-denominational education is our best chance to bring people of all faiths and none together. As religious belief in Scotland diversifies and diminishes, our future doesn't need to be a divided one."

In recent months the Scottish government has repeatedly committed itself to Catholic schools, in the 100th year since legislation brought Catholic schools into Scotland's state education system.

In June Nicola Sturgeon, the first minister, described her government as "an unequivocal supporter of Catholic schools". In the same speech she announced a 450% increase in funding for a Catholic teacher training programme.

In May Swinney gave an "absolute assurance" of the Scottish government's "commitment to maintain the Catholic education tradition".

But earlier this month Mhairi Black, an MP with the Scottish National Party (which governs in Scotland), said there should be "a debate" on the future of Catholic schools.