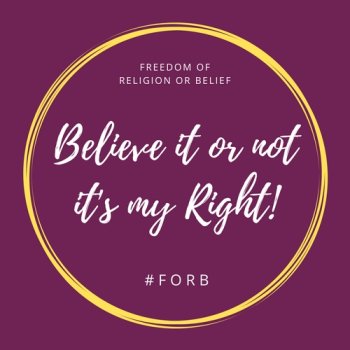 The European Platform against Intolerance and Discrimination (EPRID) launched its new #FoRBDefender movement to raise awareness of the right to freedom of religion or belief (FoRB) on June 26. The online initiative aims to show solidarity with people across the world facing discrimination, oppression and violence because of their religion or belief (including non-belief). It also calls on high-level decision-makers at national and international level to more robustly defend and protect this fundamental human right.

The campaign was developed by EPRID, together with Christian Solidarity Worldwide (CSW), European Humanist Federation (EHF), International Humanist and Ethical Union (IHEU) – to which the NSS is affiliated – and the Nordic Ecumenical Network on Freedom of Religion or Belief (NORFORB). It operates under the slogan "Believe it or not, it's my Right!"

The campaign website encourages supporters to share photos featuring the "Believe it or not" logo on Facebook, Twitter or Instagram using the hashtags #FoRBDefender and #FORB to "help to represent your religion or belief community in the FoRB Defender movement." The website also encourages people to display the logo on their social media profiles.

The movement was inspired by EU-level discussions on how the 2013 EU guidelines on the promotion and protection of freedom of religion or belief could be better implemented.

Amy Shepherd, CSW's EU Advocacy Manager and member of EPRID's 2018 Board of Coordinators, said: "Across the world, people's freedom to choose, manifest, change and abandon their religion or belief is under threat.

"There is an urgent need to stand up for FoRB and press decision-makers for more concrete and visible protective action. EPRID hopes that by reaching out to politicians, diplomats, media, business, civil society activists and others, the #FoRBDefender movement will show that FoRB protects everyone, and that everyone has a role to play in protecting FoRB."

Stephen Evans, CEO of the National Secular Society, welcomed the initiative saying "people of all faiths and none can unite to speak out against discrimination, oppression and violence on the grounds of religion or belief.

"Secularism is a fierce and principled defender of religious freedom. We absolutely defend the right of belief, but not necessarily the right to impose that belief on others, particularly when doing so diminishes the rights of the other.

"Too often the concept of religious freedom is distorted to justify the imposition of religion to the detriment of others – often the most vulnerable in society. We hope this campaign encourages better conversations around protecting genuine freedom of belief for all."

In June a report by Pew Research Center found that restrictions on religion are increasing across the world. Another Pew report in October 2017 also revealed that countries with an official or preferred religion are more likely to place a high level of government restrictions on other religious groups.