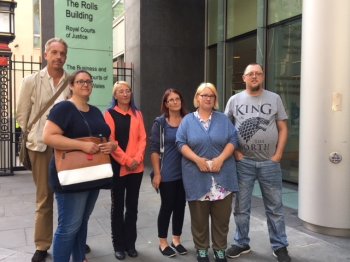 The High Court has refused to grant a judicial review of a decision to merge a non-religious school into a Christian one, resulting in a new faith school.

Amie Falconer, whose child attends Trafalgar College, sought action against the secretary of state for education for making a decision which resulted in changing a school from non-religious to Christian.

The hearing, held on Tuesday at the Royal Courts of Justice in London, was attended by a number of parents and pupils of Trafalgar College, as well as Great Yarmouth councillor Mike Smith who also opposes the change.

The change in religious designation is part of a process that will see Trafalgar College moved to the site of the Christian Great Yarmouth Charter Academy (GYCA) and GYCA officially closing. The pupils from both schools will be merged into the new site, and Trafalgar College will adopt both the name and the religious character of GYCA.

Ms Falconer applied for judicial review on the grounds that the education secretary had failed to consider whether it would be possible for an RDO to be approved, and that he had failed to follow his own guidance regarding faith-related changes.

Additionally, Ms Falconer argued that the education secretary had failed to pay due regard to the Equality Act 2010 in relation to the impact that changing Trafalgar College from a secular school to a Christian one would have on the pupils.

Ms Falconer's representatives argued that she is "deeply aggrieved and upset" that the education secretary had taken a decision "whose practical effect is to close a successful areligious academy and to replace it with a Christian school on a different site." They added, "Pupils wishing to remain at [Trafalgar College] will be compelled to attend a school with a Christian religious designation.

"The alternative for the Claimant's children is a long journey to the closest areligious school with places available."

The court heard that an RDO would result in giving the school significant additional powers, including exemptions from the Equality Act allowing the school to discriminate against pupils and staff on the basis of religion. Lawyers said that the education secretary had "failed to have due regard to the impact of the Decision on students who are atheists, agnostic or adherents to non-Christian religions of transfer from an areligious school…to a school with a Christian religious designation".

The March 2016 guidance 'Making significant changes to an open academy' states that an academy trust "must show that there is support for this change from their school and wider local community and have the express consent of the relevant religious body to become a school designated with a religious character." However, the court heard that a significant number of objections were raised to the proposed changes, including through a petition signed by 643 people.

Parents of children at Trafalgar College have made a sustained campaign against the imposed Christian designation, including holding a march in October 2017 and a protest outside Trafalgar College in May 2018.

Mr Justice Walker rejected the arguments given on behalf of Ms Falconer, saying "there is no such sufficiently arguable case as would justify the grant of permission [for judicial review]."

He added: "It is not part of the statute that the minister should second-guess what would happen once the initial academy agreement was made."

Cllr Mike Smith expressed his disappointment at the ruling.

"This is not the outcome that parents nor the local community wanted, as it represents a loss of preferred school, educational choice and wider trust in the decision making process," he said.

Megan Manson, campaigns officer at the National Secular Society, was also present at the hearing. "The issue of non-religious schools losing their secular ethos is a growing one around the country," she said.

"This hearing illustrates that even when there is clear opposition from parents and communities, it can be exceedingly difficult to challenge the imposition of religion on a school without a religious designation."