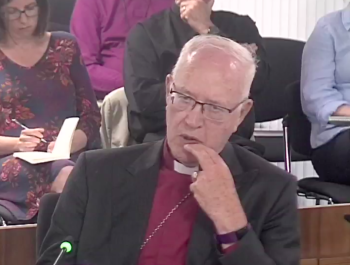 Powerful figures including an archbishop of Canterbury, senior politicians and judges helped a bishop evade justice and continue to officiate after he committed sexual abuse, an inquiry has heard.

Evidence heard at the Independent Inquiry into Child Sexual Abuse (IICSA) this week has revealed that a series of high-profile public individuals lobbied police and prosecutors on behalf of Peter Ball. Ball, a former bishop of Lewes and Gloucester, was jailed for 32 months in 2015 for sexual offences against 18 teenagers and men.

Senior clergy, MPs, an appeal court judge and public school headmasters were among those who sent letters in support of Ball when police first investigated his conduct in 1992-93.

The police cautioned Ball on one count of gross indecency in 1993, after which he returned to church duties. He was given permission to officiate at services and preached at 25 schools between 1996 and 2002. One of Ball's victims, Neil Todd, killed himself in 2012.

A lawyer for some of the victims, William Chapman, said members of "the establishment" had provided Ball with money and accommodation, legal advice, a private detective and references, along with approaches to the police and the prosecuting authorities.

Chapman said he used the phrase "the establishment" advisedly, pointing out the established nature of the Church of England. He described the church as "directly plugged in at the heart of our constitution" and "innately powerful by design".

He added that Ball's friends had been willing to "add their weight" against the due criminal process and went "far beyond the normal obligations of friendship".

Fiona Scolding, the senior counsel to the inquiry, said "influential friends both within and outside the church" had helped to buttress Ball's power.

She said Ball had told people after his arrest that four cabinet ministers had offered him a "bolthole from the press".

On Tuesday George Carey, the former archbishop of Canterbury, said he had sent one of the letters because "at that time" Ball was "a deeply respected man of the church".

In his testimony Carey admitted making "mistakes" but denied the church had made "immoral mistakes".

He told the inquiry the church's efforts to discipline Ball had "fizzled out" because officials thought he was a "sick man" who was going to retire.

At one point during his evidence Carey also said: "All of us at the time were saying, well, he wasn't raping anybody. There was no penetrative sex. And I think our weakness was actually to put it as the lowest of the low instead of seeing that whatever it is, it's unbecoming of a bishop."

Scolding said Carey had offered Ball "uncritical support". And on Thursday a former Lambeth Palace employee, Andrew Nunn, said Peter Ball "clearly was guilty" but "the problem was the archbishop at the time didn't want to believe that he was".

Last year an independent review into the C of E's handling of child sexual abuse revealed that Carey had dissuaded the police and Crown Prosecution Service from charging Ball, despite knowing concerns had been raised about him.

Carey also provided a lengthy witness statement on Ball's behalf in 2014. Chapman said this was an attempt to stop further charges being brought as an "abuse of process".

The inquiry has also heard that the prince of Wales remained in friendly contact with Ball after the caution and gave him "small gifts of money".

On Friday the inquiry will hear a written statement from Prince Charles. In a draft copy of this reported by The Times the prince said he was "certainly not aware at the time of the significance or impact of the caution".

"Whilst I note that Peter Ball mentioned the word in a letter to me in October 2009, I was not aware until recently that a caution in fact carries an acceptance of guilt."

Scolding said the inquiry had made an agreement with the prince's lawyers that he would submit a written statement after they challenged its capacity to compel him to give a formal witness statement.

Richard Scorer, a lawyer representing some of the victims and a National Secular Society vice-president, said Charles's claim that he did not understand the significance of a caution was "frankly astonishing".

"To my clients, this extraordinary lack of curiosity looks like wilful blindness."

He expressed "surprise and concern" that the prince did not have to provide a formal witness statement.

He added that Ball had found other bishops to be "perfect accomplices". He said they had been prepared to "turn a blind eye to his abuse over many decades", "cast doubt on his guilt", "smear his victims" and "rehabilitate him".

Graham Sawyer, a Church of England priest who was abused by Ball as a young man and named the joint winner of the NSS's Secularist of the Year award for 2018, strongly criticised the C of E's handling of complaints of abuse.

He said the church was running an "ecclesiastical protection racket" which prioritises its reputation above the interests of the individual. The abuse he suffered, he added, "pales into insignificance when compared to the enduringly cruel and sadistic treatment that has been meted out to me by officials, both lay and ordained, in the Church of England".

"I know from the testimony of other people who have got in touch with me over the last five or ten years that what I have experienced is not dissimilar to the experience of so many others."

On Wednesday the detective who ran Gloucestershire Police's investigation into Ball in the 1990s, Wayne Murdock, told the inquiry that Lambeth Palace "knew an awful lot that was going on" but withheld information.

"We've seen again that the C of E cannot be trusted to get its own house in order over child sexual abuse. IICSA needs to make a strong recommendation for legal change to make it obligatory to report reasonable concerns of child sexual abuse to the statutory authorities.

"It's particularly shocking to see the network of powerful people who went to bat for a child abuser rather than his victims. Deference to Church of England bishops meant horrendous abuses were shrugged off. The assumption that its clerics were moral exemplars who behaved ethically betrayed vulnerable people who suffered at their hands.

"The Peter Ball case study provides yet another good reason to bring about an end to the privileged status of the Church of England and begin the process of disestablishment."

This article was originally published on Tuesday 24 July and then updated on Thursday 26 July to include new evidence from the inquiry.