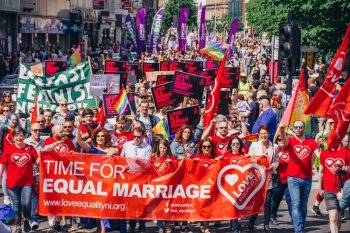 Thousands of people attended marches in Belfast and Londonderry to call for marriage equality for same-sex couples in Northern Ireland on Saturday.

Police said 5,000 people attended the Belfast march, which was led by the city's lord mayor Nuala McAllister and organised by the Love Equality campaign. Labour MP Conor McGinn, who spoke at the event, said 20,000 people had attended across the two venues.

The protesters demanded legislation from the UK parliament to ensure same-sex couples could get married in Northern Ireland.

McAllister said marriage equality was "just one step towards total equality for the LGBT community here".

Last month McGinn, who was born in Northern Ireland, introduced a bill at Westminster to bring same-sex marriage to NI. The bill was prevented from getting to the next stage. The pressure for change comes amid an ongoing deadlock over power-sharing in Northern Ireland, which has not had an executive since January 2017.

Northern Ireland is the only part of the British Isles where same-sex marriage is now illegal. On Monday BBC News NI reported that dozens of same-sex couples from Northern Ireland had married elsewhere in the UK or Ireland. On returning to NI their marriages are only recognised as civil partnerships.

Last year the High Court ruled that same-sex marriages entered into in London did not need to be recognised in NI.

In 2015 the devolved Northern Ireland assembly voted for legalisation by a thin majority. But the DUP blocked the motion using a petition of concern, a measure introduced under the Belfast Agreement of 1998 which was designed to protect the rights of minority groups.

There is gathering evidence that the Northern Irish public backs the legalisation of same-sex marriage. In April a poll for Sky Data found 76% of people in NI were in favour, with just 18% against.

DUP leader Arlene Foster has made clear that religion is an important reason for her party's intransigence on the issue.

At Saturday's rally McAllister said she was "disappointed that we cannot legislate for marriage equality locally", citing "too many people in the assembly who abuse power with the petition of concern".

McGinn said "a huge majority in the House of Commons" wanted the legislation changed.

"Westminster has a duty to legislate for equal rights in Northern Ireland. These rights are enjoyed by people right across the UK and the rest of the island of Ireland. With no functioning assembly, Theresa May must act.

"We can't have inequality and discrimination for LGBT people here - we don't have it anywhere else."

In preparation for the march Patrick Corrigan of the Love Equality campaign said it was "nonsensical that the government is denying the people of Northern Ireland the same rights as everyone else in the UK".

"Human rights should not rely on postcodes. There can be no second-class citizens in the UK."

Stephen Evans, the National Secular Society's chief executive, commented: "Same-sex couples should enjoy the same marriage rights as opposite-sex ones across the UK. That principle mustn't be restricted because of the theocratic views of a rapidly shrinking minority of people in Northern Ireland.

"Those with the power to change the law in Northern Ireland should realise that the legalisation of same-sex marriage would harm nobody. Whether in London or Belfast, they should get on with making it a reality and putting an end the ongoing discrimination against LGBT people."