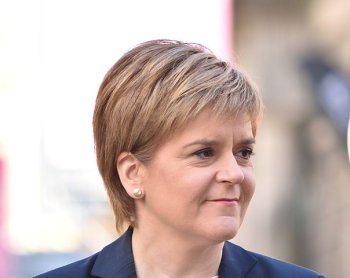 The National Secular Society has criticised the Scottish government after the first minister announced a 450% increase in the amount of money spent on a Catholic teaching programme.

On Saturday Nicola Sturgeon said the Scottish government would spend £127,000 on the Catholic Teacher Education Programme this year – up from £28,000 last year. The programme provides students with a teaching certificate which they need to teach in Scotland's Catholic schools.

The money will mean 322 student teachers can get the Catholic Teaching Certificate. Training will now be available at Aberdeen University for the first time, alongside Edinburgh, Glasgow and Strathclyde universities.

The first minister made the announcement while delivering the annual Cardinal Winning lecture at the University of Glasgow.

Alastair Lichten, the NSS's education and schools officer, said "nobody should need the approval of the religious authorities to teach in publicly-funded schools".

"A government committed to social cohesion, challenging sectarianism and promoting genuine religious freedom would be doing everything in its power to scrap the requirement to gain this certificate. Instead the first minister has decided to plough more public money into it.

"This disappointing step entrenches undue religious influence in the Scottish education system. It will inevitably encourage further demands for privileged treatment from religious groups of all stripes."

This year is the centenary of the legislation that brought Catholic schools into Scotland's state education system. During her speech Sturgeon praised the "tremendous contribution" of Scotland's Catholic schools over the last century and said the Scottish government wanted to see it continue.

"It seems to me to be inarguable that the settlement arrived at in 1918 is one which brought benefits, not just to the Catholic faith, but to all of us.

"We should acknowledge and appreciate… the strength and vigour of the Catholic schools sector."

Her words are the latest in a series of commitments the Scottish government has made to Catholic education in 2018.

In February she said Catholic schools were "good for Scotland". And last month the deputy first minister, John Swinney, gave a conference of Catholic headteachers "the absolute assurance of the commitment of the government to maintain the Catholic education tradition in the years to come".

The Winning lecture was originally created by Scotland's Catholic Church to honour Cardinal Thomas Winning, who called homosexual sex "perverted", campaigned against the repeal of Section 28 and was an outspoken critic of reproductive freedom.

During her speech the first minister called Winning a "tireless crusader for people who were poor, vulnerable or marginalised" and said she respected his "passion for social justice and his advocacy of the Catholic faith".