Welby: disestablishment “a decision for parliament and people” 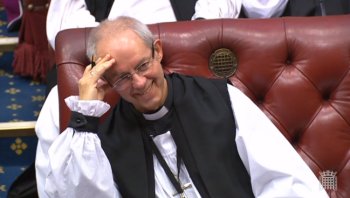 The National Secular Society has reiterated its call for the separation of church and state after the archbishop of Canterbury suggested he would not stand in its way.

In an interview with The Guardian, Justin Welby said disestablishing the Church of England would not be a "disaster" and the removal of its privileges should be "a decision for parliament and people".

"Would it be a disaster?" Welby said. "No. Nothing is a disaster with God." He added that disestablishment would be "a complicated process".

He also said local church communities acting at the grassroots level are more important than the national institution.

In response NSS chief executive Stephen Evans said: "Welby is right to say the removal of C of E's privileges is decision for parliament and people.

"It is a decision the people of Britain should make to create a fairer, more egalitarian society. Religion of course has a place in our society for those who want it, but on terms of equality, not privilege."

The NSS has been making the case for disestablishment since its founding in 1866.

Only 22% of countries have an official state religion. The UK is one of only two countries in the world that reserve seats in their legislature for clerics, the other being Iran.

It said the long-term prospects of separation between church and state were "positive". It added that "potential flashpoints", which would open opportunities for disestablishment, would emerge with "considerable frequency". It cited the "significant values gap between the hierarchy of the church and mainstream British public opinion".

In particular it highlighted the church's "regressive stance" on issues such as the ordination of female bishops, same-sex marriage and the decriminalisation of assisted suicide.

Welby's interview was conducted shortly before the royal wedding between Prince Harry and Meghan Markle, which he will preside over. His comments echo those made by his predecessor Rowan Williams last year that disestablishment would be "by no means the end of the world".

Welby also said he is "conscious of the possibility" that the Church of England's reputation could be damaged further by the revelations arising from the Independent Inquiry into Child Sex Abuse.