‘Pro-life’ group tries to restrict abortion pill use in Scotland 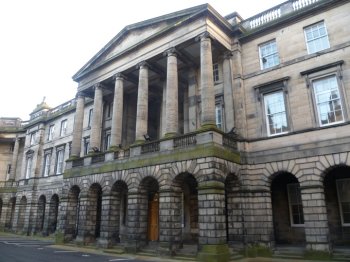 'Pro-life' campaigners have launched a court bid to block the Scottish government's decision to allow women to take the abortion pill at home.

In October Scotland's chief medical officer, Catherine Calderwood, presented plans to allow women to take the pill at home. Today SPUC Scotland, the Scottish division of the Society for the Protection of Unborn Children, has begun an attempt to secure a judicial review into the policy.

A two-day hearing is underway at the Court of Session in Edinburgh.

Leaders in Scotland's Catholic Church have been among the most prominent opponents of the Scottish government's plans. In November eight bishops asked Nicola Sturgeon, the first minister, for "renewed discussions" on the issue. They added that they would "speak up for the intrinsic value of human life and the good of both the child in the womb and its mother".

Abortion responsibilities were devolved to Scotland in 2016. In October the public health minister, Aileen Campbell, said the Scottish government would make its changes under existing abortion laws.

Pressure is mounting for ministers elsewhere in the UK to follow its lead. In March feminist campaigners wrote to Jeremy Hunt, the health secretary with responsibility for England, and Vaughan Gething, the health secretary in Wales, to urge them to allow women to take the abortion pill at home. Last month Gething said officials were looking at how the law could be amended in Wales.

Medical advice supports the case for change. The World Health Organisation says there is "no evidence" that medical abortions at home are "less effective, safe or acceptable" than clinic-based medical abortion. In 2007 a report from the House of Commons Science and Technology Committee said research had shown that "self-administration of misoprostol at home is safe, effective and acceptable".

Most abortions which take place in the UK are medical procedures, which involve taking two medicines in the early stages of a pregnancy. Under current rules in England and Wales women may only take the second drug (misoprostol, which induces miscarriage) in a clinic or hospital. As a result many have to travel home while it is taking effect.

Medical abortions accounted for 62% of total abortions in England and Wales in 2016. Almost three-quarters of terminations in Scotland were carried out at less than nine weeks' gestation and 89% of these were medical procedures.

Abortion is currently only allowed in Northern Ireland if a woman's life is at risk or there is a risk of permanent and serious damage to her mental or physical health. Last month an official report from the Departments of Health and Justice in NI strongly criticised current restrictions on terminations in cases of fatal foetal abnormalities.

National Secular Society chief executive Stephen Evans said policy on abortion "should be led by medical evidence, not religious groups' attempts to enforce their dogma on others".

In 2011 the British Pregnancy Advisory Service failed in a High Court bid to make the government allow women take the abortion pill at home.