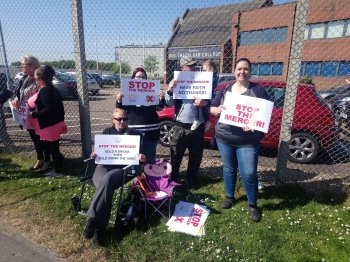 The National Secular Society has backed parents who are protesting against the merger of a non-religious school into a Christian one in Norfolk.

The parents held a demonstration outside Trafalgar College in Great Yarmouth on Thursday against the merger of the college with the Christian school Great Yarmouth Charter Academy. They expressed fears that religion will be imposed on their children.

Trafalgar, which does not have a religious ethos, will close. All its pupils are set to re-locate to the Charter Academy site, which will retain its religious designation. This effectively means a non-religious school will be closed in order to expand a religious school.

Inspiration Trust, which runs the two schools, wrote to parents on 18 May to confirm the merger. All pupils currently taught at Trafalgar will move to the Charter Academy by September next year. The letter also explained that "to help ensure a smooth transition", Charter Academy's deputy head Iain Mackintosh would be transferred to Trafalgar "with immediate effect".

On Wednesday the BBC reported that Mackintosh excluded eight pupils on his first day as headteacher of Trafalgar.

Louise Alderman, who chairs the Parents, Teachers and Friends Association (PTFA) at Trafalgar, told the NSS that Inspiration Trust were "acting recklessly with our children's education".

"Our challenge to the Inspiration Trust is to drop the religious designation at Trafalgar on the basis there is no place for it in modern society, it is not our (parental) choice and if, as the trust say, it's nothing to worry about then they will have no problem in removing it from the merger.

"Keeping the religious designation could allow at any point the Inspiration Trust to be able to actively discriminate on this basis if it chooses to do so. And because of the now complete breakdown in trust between the parent body and the trust they can't seriously think that we would believe a word of what they're telling us."

Another parent with a son at Trafalgar told the NSS that she was considering moving home due to the merger.

"We are Pagan and are not happy about being forced into a Christian school," said Natasha James.

"I have lived in Yarmouth all my life and have been forced not only to search for a new school for my son, but have also been left with no option except to move to Gorleston so that we have a better chance when applying for schools.

"The last thing I want is for my son to end up in Charter. I would home school him before that happens."

NSS education and schools officer Alastair Lichten said: "We yet again see the bias against non-religious schools here. It's entirely legitimate for parents to be concerned about the imposition of a Christian ethos on their children's school. The complete disregard of the basic right to freedom of belief in this decision is chilling."

Thursday's protest follows another demonstration held in October 2017, when the plans were first announced. The NSS wrote to Inspiration Trust to express its opposition at the time.

The NSS expressed particular concerns that the trust had made misleading claims that Charter Academy "is not a faith school" in its consultation page and FAQ document for the planned merger and ignored parents' views regarding the religious status of the academy.