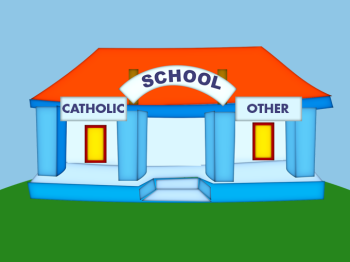 The National Secular Society has said calls for children to be segregated on joint campuses have "shown the need to take education in Scotland out of religious control".

Two councils are considering opening shared campuses between non-denominational primary schools and Catholic ones to the south of Glasgow. The Catholic Church has voiced opposition to one of the plans and said segregating children would help to alleviate its concerns.

North Lanarkshire Council is planning to build a campus in the village of Newmains, which would host Newmains Primary School and St Brigid's Primary School. A consultation report on the proposal was presented to the council's education committee on Wednesday.

This week the Catholic Church's Diocese of Motherwell expressed opposition to the plan, arguing that "the shared campus model inevitably results in a dilution of the unique ethos of the Catholic school".

In a report the diocese asked the council to extend "flexibility" to St Brigid's.

"Crucifixes, statues and other elements of iconography have a significant role in creating and sustaining the Catholic ethos and this should be evident in all areas of the school building. The experience of shared campuses in North Lanarkshire has been that all such areas have been required to be totally neutral and free of Catholic iconography."

The diocese also called for children to be segregated when joint campuses are built. "Some of these difficulties could be mitigated by the provision of totally separate entrances to the two schools rather than, as has been the case up until now, a common entrance hall leading to two separate wings," it said.

Meanwhile East Renfrewshire Council will hold a public consultation on a proposal to open a shared campus in Neilston, between Neilston Primary School and St Thomas' Primary School. The council is considering its options after both schools' conditions were ranked as 'poor' and the schools were found to have a repairs backlog of more than £2.6m.

The council's head of education services, Fiona Morrison, said "careful consideration would be given to the views of the Catholic Church". And the director of education, Mhairi Shaw, said this week that tackling sectarianism "would never be a priority or condition for us" in building the campus.

Some councils have previously acceded to the Catholic Church's demands for segregation. In 2014 West Dumbartonshire Council accepted plans for separate entrances at a joint primary school campus.

Last year East Renfrewshire opened a joint campus featuring a Catholic primary school, a Jewish primary school and a non-denominational nursery class. The NSS criticised the measure as bringing "segregation under one roof". The schools have separate entrances.

In other instances the church has asked for separate staff toilets, staff rooms, nurseries and gyms.

Most schools in Scotland are non-denominational or Catholic. Non-denominational schools are run by local councils. Each council education committee retains at least three places for religious nominees, under legislation dating back to 1929 and beyond. In most parts of Scotland this includes at least one representative of the Catholic Church and one from the Church of Scotland.

Social segregation has tended to mean children from Protestant backgrounds go to non-denominational schools, while those from Catholic backgrounds usually go to Catholic schools.

The NSS has long been calling on the Scottish government to roll back religious influence in education, including as part of its No More Faith Schools campaign.

Alastair Lichten, the NSS's education and schools officer, said the plans and the reaction to them "highlight the ridiculous situation created by religious influence in Scotland's schools".

"Even if councils do wish to tackle the religious segregation of children, their hands are largely tied. So-called shared campuses just change the nature of religious discrimination and segregation.

"Schools should not entrench sectarianism. The Scottish government needs to be bold and wrest control of education away from religious interests, so that decisions can be made purely on the basis of what is in the interests of children and wider society."

The consultation in East Renfrewshire will run until 26 June.