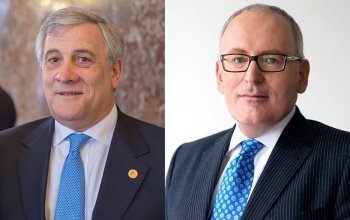 The National Secular Society has criticised two senior EU politicians after they said they would oppose restrictions on rituals such as genital cutting and religious animal slaughter.

According to Arutz Sheva, the president of the European Parliament Antonio Tajani called for the preservation of "the religious identity of Europe's citizens" during a speech at a synagogue in Brussels last week.

At the same event Frans Timmermans, the first vice-president of the European Commission, said the commission would "not tolerate" legislation which would limit kosher slaughter or circumcision.

Tajani said the European Parliament had "brought discussion of religion back to the political discourse" and would "protect religious freedom".

"Europe will not achieve integration and unity among its citizens as long as it limits or bans the religious community from fulfilling its religious commandments, such as circumcision and kosher slaughter.

"Only by protecting their rights and preserving their identities will every citizen have personal security, with the unity and equality which lead to tranquil lives. This is what Europe is based on."

Timmermans said the commission was "more determined than ever to fight for the undisturbed continuation of Jewish tradition in Europe".

"We cannot act indifferently towards the leaders and commandments of religion.

"I ask you again to inform us of any information from your communities on the subject of systematic verbal incitement in European Union member countries. We will not tolerate any legislation or legal initiatives against religious laws, including kosher slaughter and circumcision, which would limit the religious rights of Europe's citizens."

Both men were awarded prizes for making a "unique contribution to the protection of religious rights, and their consistent and determined fight against anti-Semitism" at the event. Both made reference to the Holocaust during their speeches.

NSS spokesperson Chris Sloggett said the comments "appear to suggest religious freedom should be an unqualified right which belongs only to some".

"If laws are to achieve their stated aims they must apply to all citizens in the relevant jurisdictions. Giving special exemptions to the most assertive within religious communities is often the path of least resistance but it undermines legitimate efforts to protect human – and animal – rights.

"It's particularly alarming that speeches which focused on the horror of anti-Semitism and the Holocaust should stray into this kind of territory. It's not only utterly erroneous to conflate those who argue that children deserve bodily integrity or animals should be treated humanely with those who have persecuted Jewish people for centuries. It actively undermines efforts to tackle anti-Semitism."

The NSS campaigns for a gender-neutral age of consent for non-therapeutic genital cutting. In recent months we've called on the government to follow the lead of lawmakers in Iceland who proposed a law along these lines.

We also campaign for an end to the religious exemption from animal welfare laws that allows for animals to be slaughtered without prior stunning in the UK. Last year we welcomed a move in Belgium's Walloon region to ban non-stun slaughter of animals.