No need to prioritise requests based on religion, says chief coroner 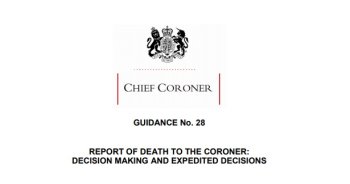 Coroners in England and Wales are not obliged to give automatic priority to requests which come from particular religious communities, the chief coroner has said.

In guidance issued on Thursday, Mark Lucraft QC said a recent court decision did not "require a coroner to give automatic priority to deaths from religious communities, nor does it require coroners to drop other important work to deal with such deaths".

"The court also recognised that other deaths may require urgent handling for non-religious reasons," he added.

The National Secular Society welcomed this declaration but warned that requirements to "respect" representations based on religious belief, even when resources are scarce, should not be interpreted too broadly.

The guidance comes after the High Court told the senior coroner for north London to change her 'cab rank' policy, under which no death was prioritised for religious reasons, last month. The court said coroners' policies needed to be "flexible" and enable "all relevant considerations to be taken into account".

Lucraft also highlighted the fact the court had said coroners have a "margin of judgment" on whether to prioritise cases.

"The decision is one for the individual coroner, considering all the circumstances. Such a decision may only ordinarily be challenged if it is unreasonable or if it clearly fails to strike a fair balance between rights of the particular family and the interests of other families who might be affected."

The guidance noted that "some faith groups, particularly Jewish and Muslim, have religious and cultural wishes about treatment of a body and burial following a death". It said coroners should "pay appropriate respect to those wishes, within the framework of their legal duties and in the context of their other responsibilities".

It also said concerns about availability of resources "cannot be used as a reason to rule out giving consideration to proper requests for expedition on religious grounds".

NSS chief executive Stephen Evans said: "The chief coroner's guidance largely reflects what the court judgement said in the Mary Hassell case: religion is one but only one consideration that coroners should bear in mind when prioritising their work.

"The guidance has made explicit the fact that coroners are under no obligation to give priority to requests which are based on religion. That's a relief – the alternative would have been utterly unfair and unsustainable.

"We're still concerned that coroners, especially those working in areas where assertive Jewish and Muslim community groups are very active, may face unreasonable demands on their time and services. It's very important that they are aware they are under no obligation to give in, and that those in power support them when they need to stand up to those demands.

"There are particular worries that the requirement to 'respect' religious beliefs may be interpreted too broadly and that coroners may feel under pressure to concede ground even when resources make it impractical to do so. Coroners will need support in exercising their margin of judgement in the face of religious demands."