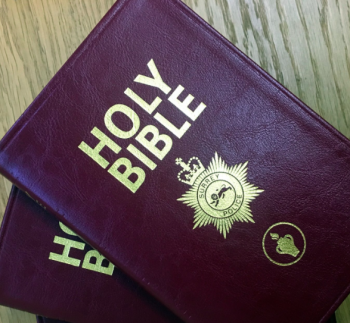 The National Secular Society has criticised Surrey Police for engaging in evangelism after it accepted 1,000 branded bibles for distribution amongst officers and staff.

This week David Munro, the police and crime commissioner for Surrey, was pictured on Twitter brandishing a bible emblazoned with the force's badge. The book was one of 1,000 which have been made available in a joint initiative between the force's Christian Police Association and Gideons International.

The Gideons is an evangelical Christian organisation famous for leaving bibles in hotel rooms.

National Secular Society CEO, Stephen Evans, said it was "disappointing to see Surrey Police allowing itself to be used in this way".

"As public service providers, police forces should serve with impartiality and without fear or favour. Distributing badged bibles and brandishing them in publicity shots gives a strong impression of religious favouritism."

The Office of the Police and Crime Commissioner (PCC) for Surrey defended itself in a tweet.

"For avoidance of doubt Surrey PCC supports the wide range of beliefs & faiths (including non-religious) in policing and is national PCC lead for Equalities, Diversity & Human Rights," it said. "Surrey Police is a multi-faith organisation."

In response Mr Evans said it wasn't the role of the police to "support beliefs".

"Good policing will inevitably involve working in partnership with local people, including faith and belief communities. But police forces must maintain professionalism and a secular ethos and be careful not to allow themselves to be used in this way for proselytising."

In 2012 a number of police forces in Scotland declined the offer of commemorative editions of the New Testament and Psalms from Gideons International. At the time, a UNISON spokesperson said: "It is not the role of a police force either to provide official endorsement of any religion or foist religious views on its staff."

The National Secular Society has written to David Munro, Surrey's Police and Crime Commissioner, requesting that the Force refrains in future from promoting any particular religion or belief outlook.