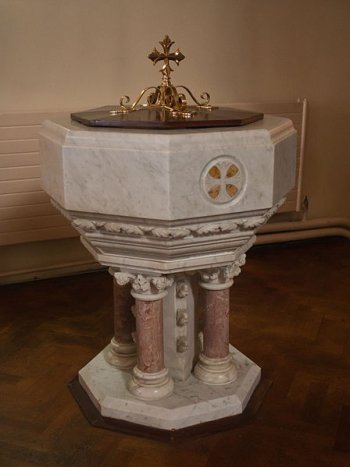 The National Secular Society has called on the Department for Education to "follow the lead" of Irish ministers who are preparing to end a rule which encourages faith-based school admissions.

According to Monday's Belfast Telegraph, the Irish government's plans to lift the so called 'baptism barrier' are "at an advanced stage". The barrier allows church-run schools to prioritise pupils for admissions based on the faith they have been baptised into.

The Department of Education in Dublin told the paper that minister Richard Bruton is expecting to announce proposals to carry out the plan shortly.

Churches run approximately 96% of Ireland's primary schools and 50% of its secondaries. The Catholic Church runs around 90% of the country's primary schools. The schools have legal protection for the 'baptism barrier' under Ireland's Equal Status Act, which the government is now expected to change.

Bruton has previously said the admissions rules are unfair and put some parents "under pressure to baptise their children in order to gain admission to their local school".

Catholic interest groups are expected to oppose the measure vociferously. A report in The Irish Times in January suggested several were prepared to take cases to court if the government tried to alter the current rule.

The news comes as ministers in England prepare to lift the cap on faith-based admissions to new faith schools. In February Damian Hinds, the education secretary, told The Sunday Times he would abolish the current rule that new faith schools must admit no more than 50% of children on the basis of their parents' religion.

The NSS is campaigning against that change, and education and schools officer Alastair Lichten said Ireland's stance should prompt a rethink.

"It's incredible that the Irish education minister is looking to remove a faith-based barrier to school admissions just as the secretary of state for education in England seeks to erect more of them.

"The Irish are well placed to recognise the harm and injustice of divided and sectarian schooling. England's DfE would do well to follow their lead and seek a move towards an inclusive education system where children are schooled together, irrespective of their parents' religious outlook."

Ireland's government is also planning to ask parents to decide who should run Catholic primary schools. The move could mean a number of those schools being handed over to multi-denominational patrons.

Earlier this year the Irish government announced that schools would be expected to offer alternatives to religious instruction, which has tended to be dominated by Christian doctrine.

Last year Ireland indicated its willingness to tackle the Catholic Church's control of hospitals when the minister of health said there would be "no religious involvement" in a new publicly-funded national maternity hospital.

The country is also due to hold referenda this year on repealing its blasphemy law and eighth amendment, which outlaws abortion in almost all cases.