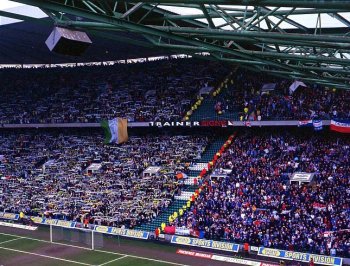 The National Secular Society has welcomed the repeal of a Scottish law which restricted football fans' freedom of expression on religion in an attempt to tackle sectarianism.

MSPs voted to abolish the Offensive Behaviour at Football Act last week, defeating the Scottish government by 62 votes to 60. All four opposition parties backed the repeal.

The act, which will be taken off the statute book next month, criminalises those "expressing hatred of, or stirring up hatred against, a group of persons based on their membership (or presumed membership)" of a real or perceived religious group, if their behaviour is or would be "likely to incite public disorder".

It applies at football matches involving Scottish national and club teams and covers behaviour among those travelling to and from the games.

When it was introduced in 2011 a minister told MSPs the clampdown could apply to Rangers fans who sang the national anthem or Celtic fans who made a sign of the cross, if the intention was to provoke other religious groups or opponents.

The then-majority SNP government said the act was designed to crack down on sectarianism. It became law in 2012.

The NSS cautioned against bringing in the legislation at the time, warning Scotland's Justice Committee that the proposed new law was "ill-considered" and posed a threat to freedom of expression.

In response to the act's withdrawal an NSS spokesperson said it was "sensible to repeal this vague piece of legislation".

"Restricting the free speech of those who attend football matches was an unjustifiable box-ticking measure which was never likely to work.

"The Scottish government should go back to the drawing board and consider measures which could genuinely help to tackle sectarian bigotry. It could start by rolling back religious influence in schools, which encourages young people in Scotland to see themselves as members of religious groups and to reject outsiders."

Labour MSP James Kelly, who led efforts the overturn the law, said he was "delighted" to see the end of "the worst piece of legislation in Scottish parliament history". He called the act "illiberal" and a "legislative disaster".

"The law was a simplistic attempt to solve a complex problem. Sectarianism is a problem in Scotland that goes back generations. It can't be solved in 90 minutes on a Saturday. The way to fix it is in classrooms and community groups."

Liam McArthur, a Liberal Democrat MSP, criticised the Scottish government's claims that repeal would leave a gap in the law. He said all offences in the "discredited" football act were "fully covered" by existing law.

The Fans Against Criminalisation group, which campaigned for repeal, called the move "a historic victory for football fans".

The Scottish government expressed disappointment at the decision. Community safety minister Annabelle Ewing said the act should be "strengthened and improved" rather than repealed.