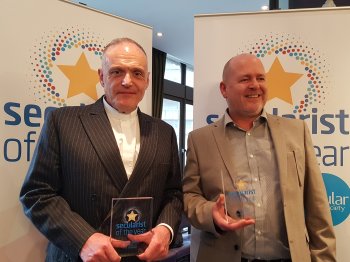 The National Secular Society has named Phil Johnson and Graham Sawyer as its Secularists of the Year for 2018.

Phil and Graham accepted a £5,000 prize from the human rights campaigner Peter Tatchell at an awards ceremony in central London today. Both were honoured for their work campaigning on behalf of survivors of child abuse in the Church of England.

Phil has worked as the chair of Minister And Clergy Sexual Abuse Survivors (MACSAS), a support group for those who have been sexually abused by ministers or clergy. Graham, the vicar of St James' Church of Briercliffe in Burnley, has been a crucial voice for change in the C of E.

The award was handed over the day after the Independent Inquiry into Child Sexual Abuse concluded three weeks of hearings into the cover-up of abuse in the diocese of Chichester. Phil gave evidence to the inquiry earlier this month.

Peter Tatchell called Phil and Graham "two exceptionally courageous, tenacious and determined men who simply refused to give in to the lies and deceit of the church hierarchy" as he handed over the award.

"If Phil hadn't fought and campaigned and battled for so many years, in all likelihood we would never have had an abuse inquiry at all," he said. He said Graham was "a deeply religious and deeply spiritual man and a true secularist".

"You can be religious but challenge religious power and privilege and believe that the church has to play by the same rules as everyone else."

"The bishops and archbishops who have allowed the brutal sexual abuse of children and vulnerable adults over many decades continue to share in the crime and this must be exposed.

"They must face the full force of the law for their crimes."

Graham also paid tribute to Phil, Peter Tatchell and the NSS. He said the society "has never been more important" and the award showed that "this is truly a society that believes both in freedom of religion as well as freedom from religion".

"The work of the society in lobbying Members of Parliament for a Britain where everyone is, as far as possible, treated equally, is so important. What sort of example are we setting to our young people when we allow one group in one religion a privileged place in our legislature by placing Church of England bishops in the House of Lords?

"What does this say to a young Muslim, Jew, Buddhist or indeed someone who has no faith? It tells them that they are not treated equally and this is plainly wrong."

Phil said it was important to "continue the fight" on behalf of victims who were often too weak to take on strong institutions on their own.

"Most of our time and resources at MACSAS are spent providing support and advocacy to victims of sexual abuse and exploitation in a religious context. Making representations to religious institutions and campaigning for change and accountability is a very important part of what we do and this award will help me to continue this work.

He criticised the Church of England as "elitist, sexist and homophobic" and said it did not "see itself as accountable to the law". He called for legal change to require mandatory reporting of sexual abuse to the statutory authorities, so that "those who fail to report or cover up abuse can be held to account".

Stephen Evans, the NSS's chief executive, praised the winners for their "courageous efforts to break the silence that has allowed an epidemic of abuse to take place in the Church of England".

"Graham Sawyer has made strong, reliable and consistent demands for reform from within the C of E. Phil Johnson has given a voice to many voiceless people who have suffered clerical abuse. Both have faced institutional hostility and worked tirelessly to promote meaningful change which will protect children in the future, often at great personal cost.

"We hope their work will cause those in positions of power to reflect on the damage done by excessive deference to religious authority. The Church of England must be held to account for its cover-up of abuse, including through independent oversight of its safeguarding policies. And ultimately it needs to be disestablished so society can hold clerical authorities to the same standards as everyone else."

The NSS has given out the Secularist of the Year award annually since 2005 to recognise a campaigner or group for an outstanding contribution to the secularist movement.

This year's nominees included Amina Lone, of the Social Action and Research Foundation; My Stealthy Freedom, which encourages Iranian women to discard their hijabs in public; counter-extremist campaigner and radio host Maajid Nawaz; Meena Varma, the director of Dalit Solidarity Network UK; and the Western Isles Secular Society, which has organised to oppose Sabbatarian control of life in the Western Isles.

Tags: Child Abuse, Church of England, Secularist of the Year