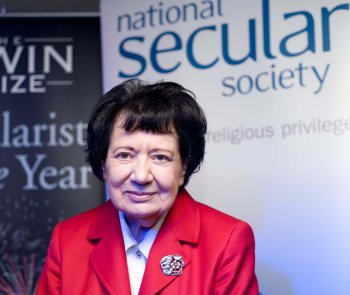 The National Secular Society is extremely saddened to report the passing of our honorary associate Baroness Muriel Turner of Camden, aged 90.

Following a successful career as a trade unionist, Muriel was appointed a Labour Party peer in 1985 and became one of the NSS's most loyal supporters in Parliament, never flinching from taking on a battle for a just cause regardless of the strength of opponents. And she helped the NSS to fight many battles, particularly over the role of religion in publicly funded schools.

Working alongside the NSS she spoke out in the House of Lords about discrimination in faith schools, the imposition of collective worship, and the need to reform religious education.

Speaking in the House of Lords in 2011 during a debate concerning legislation to permit discrimination against teachers who do not share the faith of school, she said: "Like most secularists, I also believe in equality. We also believe in freedom of religion. All we object to is that beliefs that we and other people do not share are simply imposed on us whether we like them or not…. These amendments seek to protect the position of people who do not share a religious point of view but who nevertheless may be very good teachers."

Unfailingly courteous, she was nevertheless merciless about those – sometimes in her own party ­– who she judged hypocritical or uncaring about the disadvantaged.

Muriel was a conviction politician. She left the front bench for the last time in 1996, just before Tony Blair became Prime Minister. Yet she was clearly able, as demonstrated by her being a Deputy Speaker of the House of Lords until 2008, when she was over 80.

She will also be remembered with particular fondness and gratitude for her being in the forefront of championing gay rights, at a time when the Labour party was very much more socially conservative on this issue.

It was particularly apt that she was co-sponsor for the introduction in 2014 into the Lords of her close friend (and also NSS Honorary Associate) Michael Cashman following him stepping down as a senior Labour MEP. Michael then became the Labour Party's special envoy on LGBT issues worldwide. It was almost as if she was passing on the baton; her health was starting to fail.

NSS president Keith Porteous Wood commented: "I will deeply miss Muriel's immense warmth and sense of humour. I remember her observing wryly that her principled rebellions had cost her dearly in preferment in Government or plum jobs such as chairing quangos, which she felt always went to those who blindly obeyed the party line. And having been around the political scene so long, she had a perspective few could match. I was particularly struck by her rueful conclusion that in her decades in Parliament it had become progressively more subservient to religion. And this was despite the decline in belief of the populace at large, making Parliament less representative of those it serves, something she deeply regretted.

Independent school still not teaching about evolution after warning

A school which was subject to regulatory action after being found teaching creationism as science has failed a further inspection.