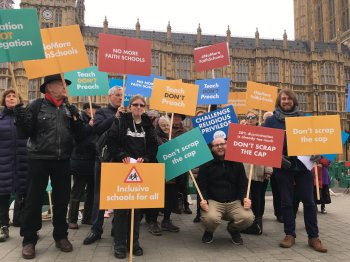 The National Secular Society has led a protest outside Parliament against plans to extend religious discrimination in school admissions – as a select committee considers an inquiry into the policy.

NSS supporters declared their opposition to Government proposals to lift the faith-based admissions cap on schools and open a wave of new faith schools in England.

Under current rules no more than 50% of a faith school's intake can be chosen according to parents' religious affiliation. But in 2016 the Government, under pressure from the Catholic Church, said it would lift the cap in the position paper 'Schools that work for everyone'.

This week the education secretary, Damian Hinds, said he planned to press ahead with plans to abolish the cap.

Meanwhile the education select committee has told the NSS it is considering an inquiry into the policy. The committee's chair, Robert Halfon, told NSS chief executive Stephen Evans it would discuss its upcoming programme "shortly" and it "may include the 50% cap".

The NSS has twice called on the committee to hold an inquiry. In a letter to Mr Halfon last month Mr Evans expressed the Society's concern that the Government would "give effect to this significant policy shift without reference to Parliament". He wrote that an inquiry would be "essential to provide any degree of parliamentary scrutiny to this divisive policy shift". The education secretary has the power to scrap the cap without passing legislation.

Mr Evans added that "the proposal has the potential to significantly increase religious discrimination and social and ethnic segregation within our publicly funded schools".

"There is a significant and growing weight of academic and expert opinion to support the contention that religiously based admissions criteria produce more religiously, ethnically and socially segregated schools. We believe that an inquiry by your committee is essential to provide a forum for such evidence to influence the policy making process."

After today's protest Mr Evans said: "The Government should think very carefully about making faith schools even more discriminatory at the behest of bishops. If we want a cohesive society tomorrow, we need a secular and inclusive education system today.Policies that promote segregation and discrimination should make way for policies that promote integration and cohesion."

The Government's plans appeared to have stalled when Justine Greening was education secretary. But last month Mr Hinds, who had spoken out in favour of lifting the cap as a backbencher, replaced her. His appointment was widely viewed as a sign of the Government's intent to press ahead.

The NSS wrote to Mr Hinds when he was appointed and urged him to "strike a blow for cohesion, equality and fairness" by abandoning the plans.