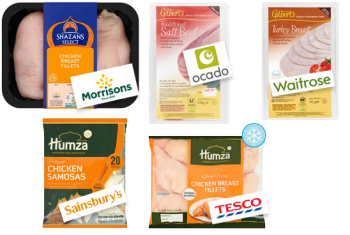 Meat from animals which have not been stunned before slaughter is widespread in UK supermarkets, National Secular Society research has found.

The NSS examined the policies of 11 supermarket chains and their online produce range, and found that the majority require all meat for their own-brand products to be pre-stunned. This is in line with animal welfare legislation requiring animals to be stunned before slaughter to minimise suffering. But several sell non-stunned meat from other brands, and only two credibly commit to selling meat only from animals that are pre-stunned.

Waitrose sells unstunned meat despite a policy which misleadingly implies otherwise. Waitrose's policy says: "All the livestock that provide meat for Waitrose are pre-stunned before slaughter to ensure they are insensitive to pain before being killed". It does not make clear that this refers only to own-brand products.

The only major supermarket that credibly and explicitly rejected all non-stunned meat was Marks & Spencer. Their policy states, "All the meat and poultry we sell must, without exception, come from animals that have been humanely slaughtered and animals must be pre-slaughter stunned". No non-stunned halal or kosher products were found on their online site.

Co-op also appears to have rejected unstunned meat at present. "No Co-op own brand fresh and frozen British meat or poultry is Halal certified or slaughtered in a ritual method," its policy states. "We do sell some non-Co-op branded Halal certified meat in a small number of stores where there is sufficient demand, but again this is all stunned prior to slaughter."

Slaughterhouses that kill animals for kosher or halal meat can currently be granted exemption from the requirement to pre-stun animals.

The NSS's research comes shortly after the Government re-stated its interest in introducing labelling requirements for halal and kosher meat to indicate the method of slaughter. Farming minister George Eustice said the Government would consider the move so shoppers can make an "informed choice". His words back up a similar statement from Lord Gardiner of Kimble to the NSS in November.

"We welcome the Government's apparent willingness to introduce labelling to inform consumers, but this must now be backed up in practice. Clear and accurate labelling of meat from non-stun slaughter is necessary to provide consumers with relevant information and will also serve to reduce the amount of meat from non-stun slaughter entering the mainstream food chain. Hiding away the provenance of unstunned meat helps to normalise animal cruelty and serves the interests of religious hardliners who want to increase its supply.

"And ultimately animal welfare laws should apply fairly across society. This means repeal of the religious exemption that permits non-stun slaughter in the first place."

At present there is no legislation requiring meat from animals slaughtered without stunning to be labelled as such, meaning consumers cannot tell which brands of halal meat are stunned unless they research the topic.

The majority of halal meat in the UK is pre-stunned. For example, halal supplier Najma states: "We follow the Islamic values of treating all animals with kindness and compassion. To ensure the welfare of the animals, we do use recoverable stunning prior to slaughter. This is in accordance to the specific rules set out by the Islamic faith and under supervision of our European Halal certifying bodies."

But other brands, including Shazans Select HMC range and Humza, are certified by authorities such as the Halal Monitoring Committee and Halal Monitoring Board, which only certify meat that has not been stunned before slaughter. New data from the Food Standards Agency has revealed a sharp rise in the number of animals slaughtered without pre-stunning over the last four years.

The RSPCA, Compassion in World Farming and the British Veterinary Association have all criticised non-stun slaughter, along with many animal welfare experts. The Farm Animal Welfare Council – a UK Government body – has said the practice should be banned. The EU's Scientific Panel on Animal Health and Welfare has said "pre-cut stunning should always be performed".

The NSS campaigns for religious exemptions to animal welfare laws to be abolished. While non-stun slaughtered meat is still permitted, the Society is calling for clearer labelling on meat slaughtered by religious methods to help consumers make informed choices. The NSS has criticised recent proposals for labelling of halal meat as confusing.

Details of the NSS's research can be found here.